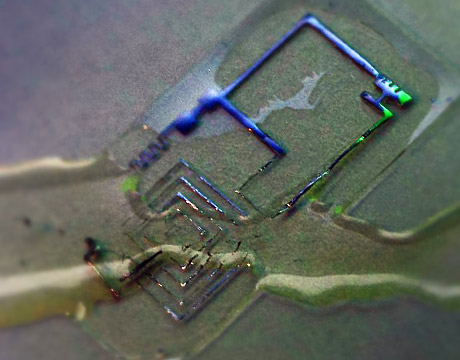 The new field of green electronics promises electronics made from low-cost, environmentally friendly biodegradable synthetic materials. They’re human friendly as well. That is, they’re compatible with the human body.

“The sensors and attendant electronics are meant to work for a few weeks, then completely dissolve over the course of about a day when immersed in fluids,” says Mihai Irimia-Vladu, a materials science researcher at FH Joanneum University in Graz, Austria.

Sometimes called zero-waste sensors and electronics, the devices can be used for a number of medical applications. They degrade naturally into the body, so they don’t have to be removed surgically, which can cause surgical complications, says John Rogers, who heads the Rogers Research Group at the University of Illinois at Urbana-Champaign, who has led research on these electronics. Rogers is a chemist and a materials scientist at the university.

In terms of medical use, biodegradable electronics could be used for dissolvable catheters or to monitor bacterial infection after surgery, while biodegradable sensors could monitor the kidney, heart, and lungs, he says.

As for environmental applications, transient electronics could be used as sensors that transmit data from remote locations, and then degrade into the soil to eliminate waste, he adds. Other uses include soft robotics or disposable electronics used in food packaging or other disposable applications.

A number of green electronics are now in the research and testing stages.

For instance, working together, researchers from a variety of universities and institutes in America and South Korea are testing a biocompatible pressure and temperature sensor integrated on a biodegradable silicon chip. The chip sits on the brain’s surface and is connected to a wireless transmitter attached to the outside of the skull.

The sensor itself is smaller than a grain of rice, Rogers, says. When tested in rats, the device monitored intracranial pressure and temperature at least as accurately as existing devices.

Rogers is lead author of a paper on the research that appeared in the February 2016 edition of the journal Nature.

Some might be surprised to learn that silicon, not known for its biodegradable nature, is used for the chip. But in addition to being biodegradable (albeit over centuries), silicon is the most common semiconductor material used in today’s electronic devices, Rogers says. The silicon dissolves due to hydrolysis, in which water and silicon react to form silicic acid. Silicic acid is environmentally and biologically benign.

Although it takes many hundreds of years to dissolve today’s silicon semiconductors, thin layers of silicon can dissolve at rates of 5 to 90 nanometers per day, he adds.

“Although other organic electronic materials are also often biodegradable, silicon-based electronics have the advantages of an overall higher performance and the use of complementary metal-oxide-semiconductor fabrication processes that allow for mass production,” Roger adds.

The researchers created the pressure and temperature sensor from thin layers of silicon.

“Many procedures in modern clinical medicine rely on the use of electronic implants in treating conditions that range from acute coronary events to traumatic injury,” Rogers writes in the Nature paper.

Standard, permanent monitoring, along with other electronic hardware used in the body, acts as a breeding place for infection: Bacteria form biofilms along wires or travel through the blood to cause other bodily tissues to become infected, Rogers says. Also these type of implantable electronics must be surgically removed, exposing patients to potential surgical complications.

Researchers also showed their device needn’t be wired through the skin. They connected a sensor to an implanted—but only partially absorbable—data-communication system, which proved “there is no need for any percutaneous wiring,” according to the Nature paper.

“The devices can be adapted to sense fluid flow, motion, pH or thermal characteristics, in formats that are compatible with the body’s abdomen and extremities, as well as the deep brain, suggesting that the sensors might meet many needs in clinical medicine,” according to the paper.

Next up for the group of researchers: biodegradable circuits made from various polymers.

“We’re working on building more advanced circuits, and doing so with commercial foundries, and on back-end assembly techniques that will allow these circuits to be deployed on a range of biodegradable polymer substrates,” Rogers says.

For Further Discussion
The sensors and attendant electronics are meant to work for a few weeks, then completely dissolve over the course of about a day when immersed in fluids.Mihai Irimia-Vladu, FH Joanneum University