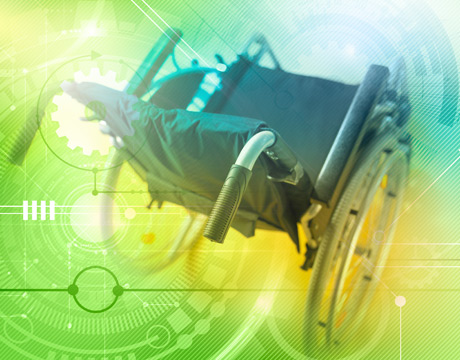 One of the key goals in developing a community is to know how to truly listen to the problems of others. The NYU Ability Project is focused on not only understanding but also solving problems.

The program allows projects that might combine engineering, art, and beyond, says Anita Perr, clinical associate professor of occupational therapy at NYU and co-director of the Ability Project.

Wheelchair Umbrella is one creation being developed under the program with a collaboration between engineering and art students. “We had someone who wanted an umbrella for their wheelchair where she and the chair wouldn’t get wet,” says Perr, whose background includes rehab engineering, having worked at the National Rehab Hospital in Washington, DC. “She couldn’t open and close it and, umbrellas are made for people to stand, which limits how it covers someone,” Perr adds.

Currently, they have a wooden mockup that attaches to the wheelchair and uses vellum because the creators couldn’t figure out material which would stand up over time and fold well, she says. The wooden frame opens over the wheelchair rider over the backpack and out to their feet. “It comes out long enough from tip to tail and wide enough to cover the person’s hands, which is a little bit further than their seat so they can get to a wheelchair controller,” she explains.

The user would activate a switch to deploy and open the umbrella and a switch to close it and fold it back up. It would be collapsible to both fold and tuck into the wheelchair. “They got it to where it opens and closes and did a proof of concept,” she says. “Problems still to deal with include wind and rain. It doesn’t always come straight down so what if it rains sideways? How can you still be protected?”

Another project to come out of the program is GyroCafe. It allows someone using a walker to balance a food tray. “When you use a conventional walker and pick it up and move, it changes its angle in relationship to the ground,” says Perr. “Whatever is standing on a tray attached to the walker can tip over and fall off the tray to the floor.”

Using glue spots on the left and right, the team built on pivot points so you can rock from left to right and forward to back. Everything inside the basket stays level and the apparatus accommodates the changes in position that the walker makes, she says.

The program encourages more than just physically oriented projects. LOLA, created by Tech Kids Unlimited, which has been hosted in the NYU Ability Project’s space, has the goal of helping those with autism. “They developed an app to address social needs for kids [with autism],” Perr says.” “Instead of someone’s mom asking every day if you brushed your teeth, with this app the kids could personalize it. It sets up reminders for them.”

Even though the hope is that the NYU Ability Project will help users, Perr emphasizes that it’s also to help its creators. “It gets you thinking about the world around you and what someone goes through,” she says. “If we can get people thinking early about helping in this way, then maybe it will inspire them to take it that much further over their career.”

Perr says that although engineers and artists are often at the forefront of these projects, anyone at the university can be involved. “You never know who is going to see a possible improvement,” she says. “It’s also a great feeling to be a part of maybe changing someone’s life. Holding an umbrella, these are things we take for granted. This project is about doing something. We don’t always have to accept that we can’t make it better.”

For Further Discussion
If we can get people thinking early about helping in this way, then maybe it will inspire them to take it that much further over their career.Prof. Anita Perr, co-director, NYU Ability Project