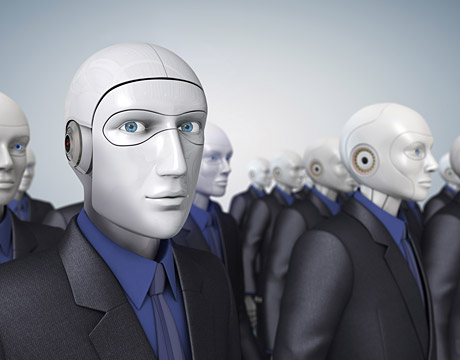 A World Without Work

Moshe Vardi has devoted his life to making technology serve our needs. As the director of Rice University’s Ken Kennedy Institute for Information Technology, his contributions to computer science are vast. But recently he has started to ask unnerving questions about the consequences of ever-increasing automation. A world where robots and algorithms replace as much as half of the human workforce may be mere decades away. Now’s the time, he says, to start planning for a future with massive unemployment, and to start soul searching for what humans might do with a lot of extra time on their hands.

ASME: How were you drawn to the question of what to do when technology has replaced all jobs?

Moshe Vardi: The Atlantic Monthly contacted me to write an article about Alan Turing. It finished with the question of the potential impact on jobs. The editor said, “The stuff you wrote about Turing isn’t so great, but the stuff about jobs is very interesting, can we focus on that?” The article, the “Consequences of Machine Intelligence,” came out in 2012. Now, I’m in academics and we count citations. Google Scholar says I have close to 37,000, but it took me about 37 years to do that. With this article I got 50,000 hits in three months. It’s an issue that has a huge impact on society and people care very deeply about it. It’s more immediate to them than almost anything technical I can do.

ASME: So has the potentially darker side of technology given you pause as a researcher?

MV: Most people like to get up in the morning, look in the mirror, and feel good that they are doing good things. Most of us, we need to make a living, but we also want somehow to say we are good people. So if you ask most computer scientists if what they’re doing is for the benefit of society, they say “Yes, of course. We develop technology, people can use it.” But now I look at the big picture. The question is much more open than I used to believe and I spend more and more of my time studying this topic.

ASME: What about the argument that technology creates as many jobs as it obviates?

MV: The neoclassical economists say that there will be new jobs, that human needs are infinite. But this is a matter of fierce debate. No one really knows. Is the fact that technology creates new jobs an economic law or is it a trend that will end? Can this look at the past predict the future? Maybe and maybe not. And what happens if not? The assumption is the good the economy creates for everyone. What happens if this is not true anymore? In 1981 the PC came out. But if you look at the last 35 years, the economic data is terrible. It’s been good for the top one percent, maybe the top ten percent. People with good cognitive skills have done well; working class people and middle class people have done miserably. Look at manufacturing. We have lost many millions of people. What are the new jobs? Website designing? How many that worked in making cars are designing websites? They are the lost generation. This is not something about the future, the future is now. There is already a crisis.

ASME: You’ve written that we might expect unemployment to go as high as 50 percent. What are the job-stealing technologies on the near horizon?

MV: The obvious thing is driverless cars. It’s coming up in the next 10 years. Ten percent of the jobs in the U.S. involve operating a vehicle; so automated driving is going to see millions of people losing their jobs. Then there are other parts of the logistical chain, from off-loading the containers in a port, which is being automated as we speak, to automated tracking, and moving goods in warehouses. Amazon is working very hard on robots that can unpack and pack. The whole thing can be automated, and this is not some science fiction, this is unfolding in the next couple of decades. ASME: How do you think we should plan for this kind of a future?

MV: One proposal is the basic income guarantee, which is an idea that used to be a conservative idea. It came from people like Milton Friedman. If you look at the social welfare network, there is a huge government bureaucracy that decides who gets this support and who doesn’t get this support. They said let’s do away with this bureaucracy; let’s give everyone a basic income guarantee. Everyone will get it, even if you’re a millionaire, you still get your $20,000 a year. So, basically, we eliminate all welfare programs, and everyone gets enough to live on.

ASME: So if our survival needs are met, what’s wrong with not working? Isn’t the point of technology to make life easier?

MV: Work doesn’t just provide a living, it provides meaning. We define ourselves by what we do. The first question we ask when we meet someone is ‘What do you do?’ We don’t ask each other what we had for lunch, but somehow ‘What do you do?’ seems like an essential question. It’s the thing that gives meaning to our lives. If you take it away, it’s a radical change for humanity. We don’t have many historical precedents for that, but there are some. In the Roman Empire they had slaves, who, like robots, did all the work. One solution was to have a subsidized grain, and entertainment. It’s dystopian, it’s not the way we want to see society go. We don’t want to see gladiators kill each other. Maybe today we are a little more enlightened, but do we want a society where all people do is watch spectator sports and lots of reality shows? Is this what future society will look like? No one really has an answer there. Until recently this idea was just preposterous.

‘What do you do?’ seems like an essential question. It’s the thing that gives meaning to our lives. If you take it away, it’s a radical change for humanity. Prof. Moshe Vardi, Rice University