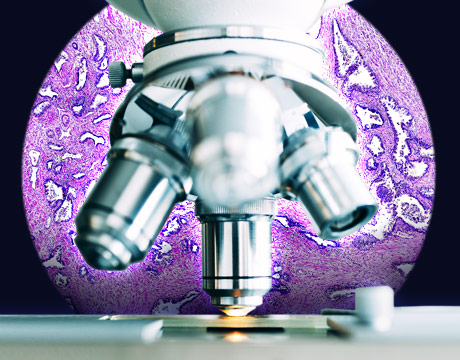 Engineering a Win Over Prostate Cancer

Dr. Parissa Ziaei dreamed of becoming a doctor growing up. As a Washington State University Ph.D. student in the interdisciplinary materials science and engineering program, she focused her efforts on a devastating disease.

“Prostate cancer is one of the leading causes of death among men in the United States,” she says. “This is one of those diseases where it’s very important to find it before symptoms emerge because often it’s too late at that point. Anytime you can find a way to make procedures easier on people that will only help in getting them involved.”

This thinking meant her work involved creating a noninvasive technique and device to not only diagnose the disease, but determine how well treatment is working.

“One of the best ways to diagnose involves biopsies but, with that, there is the chance of getting infection or having bleeding,” she says. “In our experiment we designed a technology to capture fat droplets, exosomes which are teeny tiny packages close to 100 nanometers. This package has all the gene formation that can easily travel between the cell and have intercellular communication. These exosomes, through this process, can show what has cancer.”

For the device, she grew silicon, but in the form of glass nanosprings, which also have biomarkers with them. These nanosprings produce high surface area: almost 260 meters squared/per gram, she explains.

“It would be easy to get functionalized and because you have high surface area we are able to function at the surface with a lot of biomarker and molecules,” she says. “Because of this, we can capture a large number of exosomes with the spring. The nanospring in the silicon wafer has been capturing well. In the future, the idea is to use this technology to make a similar device to capture more exosomes and use it when it comes to treatment and the diagnosis.”

The silica wafer implemented, according to her research, uses chemical vapor deposition for part of this process and the silica nanosprings have flexible support for aspects such as biosensors and enzymatic microreactors.

The efforts on this project have been supported by the Assistant Secretary of Defense for Health Affairs.

“The hope in the future for this project is that a blood or a urine sample can go to a diagnostic lab and the device will be able to measure the number of exosomes and based on that say they have cancer or not,” she says. “Or use the device for the total treatment, the doctor processing the treatment plan and through a sample seeing how effective the treatment was.”

For Ziaei, she will continue to be spurred on by the true origins of her dream—helping others.

“I always look back on being around five or so years years old, a kiddo, walking around pretending to be doing the treating,” she says. “To feel I’m useful to others, having the opportunity in this area is unbelievably fulfilling.”

For Further Discussion
The hope in the future is that a blood or a urine sample can go to a diagnostic lab and the device will be able to measure the number of exosomes and based on that say they have cancer or not. Dr. Parissa Ziaei, Washington State University