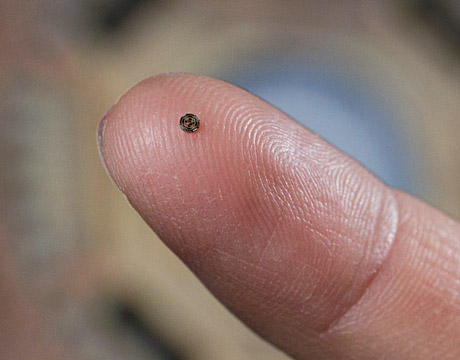 A single-chip device that would provide 3D imaging from inside the heart, coronary arteries and peripheral blood vessels. Image: Rob Felt / Georgia Tech

A Way to Your Heart?

Talk about surgeries that involve the heart and often people will think of the risks involved. But what if there was a device that could improve a patient’s chances for a positive outcome through a different angle of sight for surgeons? A chip-related technology being worked on at Georgia Tech might be leading to one more tool for the medical community’s arsenal.

“We’ve been developing this invention involving transducers and a chip,” explains F. Levent Degertekin, professor of mechanical engineering at Georgia Tech. “It was clear that a small device could help. My brother, who is a cardiologist, said if you want to include devices like this then you need to include a camera. It helps to see in front of you while doing surgery and, really for devices before, it was like driving your car and looking from side windows but you don’t have a front windshield.”

The chip Degertekin’s team has developed can actually get inside the heart and blood vessels. For example, if the artery is totally blocked, you can see beyond that blockage, he says.

“You need to understand that what we have are these transducers and receivers distributed over that chip area and it’s very much like radar,” Degertekin says. “Information ultimately comes from a cable to a computer and since we know the location when it comes to a receiver, we do math to align those signals and create an intensity map and we can create a three dimensional image.”

One problem in this single chip technology is that it requires building transducers directly on top of the electronics, he says.

“It’s like a sensing chip and building the imaging device directly upon it requires low temperature processes,” Degertekin says. “You wouldn’t go to a temperature like 400 degrees centigrade because of the survival of the electronics. Another challenge was developing the design tools to predict performance of the devices. For this fabrication process, we basically had to design electronics compatible with this transducer array. We also had to bring a multidisciplinedteam together. We were combining aspects like vertical engineering, mechanical engineering and cardiology.”

A vital issue was reducing the number of cables. “Because on that single chip there are more than one hundred receivers of ultrasound and you can’t connect all of them individually from outside,” he says. “You have to build the electronics and get information from all those devices and get out like four at a time by sequencing. And then we do the circuit design. We send computer files to a foundry and they come back to us from silicon wafers and then at Georgia Tech we process the wafers to put these vibrating devices on them. Even then, you still have to process to make them like a doughnut shape to be suitable to put on a catheter and there’s even still more.”

They still want to make further improvements, including eliminating the catheter. “The chip is around one millimeter in diameter at present and there are around ten cables, but we are even developing a new system which would need less cables,” he explains. “There’s more potential to explore.”

For Further Discussion
It helps to see in front of you while doing surgery and, really for devices before, it was like driving your car and looking from side windows but you don’t have a front windshield.Prof. F. Levent Degertekin, Georgia Tech