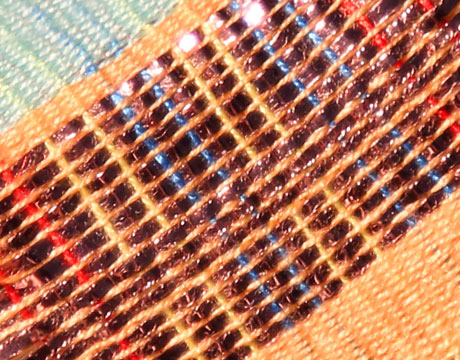 Fabric woven with special strands of material that harvest electricity from the sun and motion. Image: Georgia Tech

In the ongoing search for environmentally friendly, renewable energy resources that can power personal electronics day and night, both at home and on the-go, Georgia Institute of Technology researchers are leveraging their work in triboelectricity and solar energy. The researchers have developed a wearable textile composed of two fabrics to source energy from both sunshine and mechanical motion.

“[It’s] a novel solution with a collection of compelling features [that], for the first time, is presented as a sustainable power source for wearable electronics,” says Zhong Lin Wang, professor in the Georgia Tech School of Materials Science and Engineering and a pioneer and world leader in nanoscience and nanotechnology.

Such a textile that generates electrical power from absorbed solar irradiance and mechanical motion could be an important step toward next-generation wearable electronics, he adds. The textile itself becomes a power generator for smartphones, personal global positioning systems, and other portable electronics.

Although known to produce energy and a field of study for many years, triboelectricity – producing an electrical charge from friction caused by two different materials coming in contact – was largely discounted as an energy source because it was considered unpredictable and not well understood.

As so often happens, the discovery that the triboelectric effect could be harnessed for power generation was a happy accident triggered by a discovery made by Wang and his team five years ago. While working on piezoelectric generators, the output from one piezoelectric device was much larger than expected. The researchers traced the cause of the higher output to incorrect assembly that allowed two polymer surfaces to rub together. Further research by the group resulted in the invention of a triboelectric nanogenerator that was key to being able to reliably convert an electrical charge into current. Since then, Wang’s team has been harvesting all kinds of mechanical energy that is wasted daily, such as human motion, walking and other vibrations.

The way that the triboelectric generator part of the textile works is that two dissimilar materials, one an electron donor and the other an electron acceptor, are used. When the materials are in contact with each other, electrons flow from one material to the other. If the sheets are then separated, one sheet holds an electrical charge. Then if an electrical load is connected to two electrodes placed at the outer edges of the two surfaces, a small current will flow to equalize the charges. By continuously repeating the process, alternating current can be produced.

The textile base is also made of inexpensive commonly used polymer materials on which the solar part and triboelectric parts are woven in a staggered way on an industrial weaving machine to produce the hybrid power textile.

“This approach enables the power textile to be easily integrated with other functional fibers or electronic devices to form a flexible, self-powered system,” Wang says.

The resulting textile is very versatile and can be customized into any shape and size, woven together with cotton or wool fabric and also be used as a coating on existing fabric products.

The researchers are encouraged that the textile is ultra-thin, flexible, breathable, highly adaptable to clothing, and also because production and assembly are low-cost, environmentally friendly and likely to be suitable for large-scale manufacturing. They also believe the textile can be adapted for large-area applications such as curtains and tent although the size now is limited to the equivalent of A4 paper because of the capability of the weaving machine.

Testing of a small piece of the textile by the team has shown that the combination of sunlight and any daily mechanical motion, such as human activity, car movement, or wind-blowing, has delivered sufficient power for directly charging a commercial cell phone or continuously powering an electronic watch. Testing also showed there is good performance in the temperature range that human beings tolerate.

There are things to be done. Testing for long-term durability is one, although current experimental data does not indicate any evidence of a drop in electrical output under what would be considered normal use and also durability to moisture including rain. The team knows that electrical output of the textile is gradually reduced when relative humidity rises from 10 percent to 90 percent, but it is believed that it could withstand rain if properly protected. Additionally, if the textile does get wet, performance can be recovered when the device dries.

In presenting its findings in a paper published in Nature Energy, the team wrote, “Developing lightweight, flexible, foldable and sustainable power sources with simple transport and storage remains a challenge and an urgent need for the advancement of next-generation wearable electronics. Searching for renewable energy resources that are not detrimental to the environment is one of the most urgent challenges to the sustainable development of human civilization.”

For Further Discussion
The power textile [can] be easily integrated with other functional fibers or electronic devices to form a flexible, self-powered system. Prof. Zhong Lin Wang, Georgia Institute of Technology