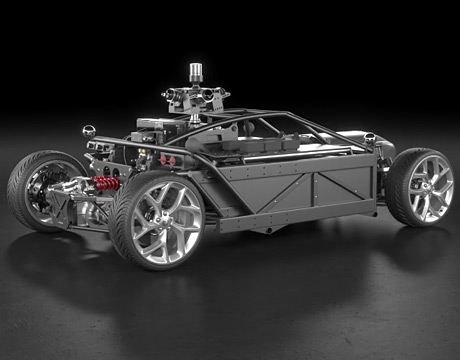 The Blackbird shapeshifting car rig developed for the creation of photoreal CG vehicles. Image: The Mill

From movies to virtual ads in sports stadiums, realistic computer graphics have invaded our world. But to create a believable virtual car, one that makes you feel the acceleration as it comes out of a curve, you need to start with a real, physical car.

Not just any car, either, but the first car that morphs its size and performance to emulate anything from a Ferrari to a pickup truck.

That would be The Mill’s fully adjustable Blackbird, named after the stealthy SR-71 spy plane. The automotive version is stealthy too, but in its own way. It is designed for what CGI artists call reskinning: placing virtual shapes and colors over a real car so it looks like another vehicle.

Surprisingly, the driving force behind the Blackbird is television ads, said Angus Kneale, chief creative officer of the New York office of The Mill, a British advertising agency, who has directed many commercials.

“When model years change, automakers might change only a few features,” Kneale said. “Rather than refilming an ad, we digitally alter those features.”

Creating a believable CGI of a moving car is not simple. It requires not only a physical car that moves realistically, which you can then reskin, but also complex photography to capture shadows and the reflections that would ordinarily show up only on highly polished paint and chrome.

“I got to thinking, ‘There must be an easier way to do this,’” Kneale said. He decided to design a single car that could emulate any vehicle on the road, which would simplify photography. To build it, he turned to J.E.M. Effects, a special effects company that makes cars that withstand chases and crashes in films.

They built a car that can extend its wheelbase and length by up to 4 feet and its width by 10 inches to mimic various makes and models, and can accept a wide range of wheel sizes. It has adjustable suspension and a powerful, electric motor that Kneale can program to match the acceleration, ride height, rigidity, and dampening performance of virtually any vehicle.

To gather the photographs needed to create reflections, Kneale enlisted Lev Yevstratov of Performance Filmworks, which specializes in suppressing vibration in the long camera arms used to film Hollywood car chases. Yevstratov shrunk the large mechanical devices ordinarily needed to do that so that the four high-definition Blackbird cameras did not stick out from the vehicle’s silhouette.

“The first time we tested it, it worked like a dream,” Kneale said. The Mill is already using the Blackbird to film virtual vehicles driving down roads of all sorts, and saving clients millions of dollars in CGI processing time, Kneale said. “If you want to film a campaign in Patagonia, it’s remarkably cheaper to send one Blackbird than your entire line of vehicles.”

I got to thinking, ‘There must be an easier way to do this.Angus Kneale, The Mill