A Robot That Prints Tissue

A Robot That Prints Tissue 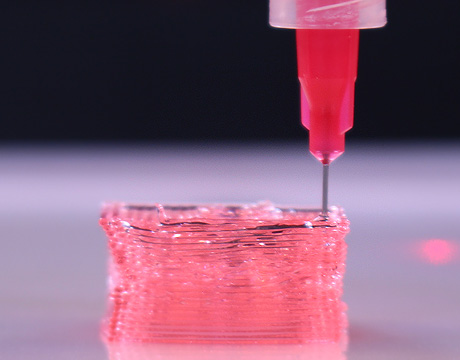 Advanced Solutions Life Sciences has created a six-axis robotic 3D printing workstation that can be used to create tissue, cells, biological gels and coatings, and perhaps eventually an entire human organ, such as a heart. The six-axis robot is more precise than the typical three-axis bioassembly tool used to print tissue, which Lehanna Sanders, the company’s business development manager, says are slow and don’t typically handle curves well.

Currently, researchers use her company’s Bioassembly Bot to fabricate biological tissue structures on which to run experiments, but in the future it could help with patient diagnostics and may be used to print living tissue inside patients during surgery, she says.

The printer, for example, isn’t restricted to printing on a flat surface. A video at the company’s web site shows an angiogram printed on to the contoured surface of the heart, for example.

“This comes in at an angle to make structures on something that’s not a flat surface, which is important for eventually generating tissues and—down the line—full organs,” Sanders says.

The Louisville, KY-based company came up with the design for the multi-axis printer and incorporated the modular heads on an Epson robotic arm. The arm and the number of axes allow “surgeon-like” precision when building 3D tissue structures, says Michael Golway, the company’s president and chief executive officer.

It’s the robotic nature of the tool, along with its six axes, that turn the 3D printer into a 3D biofabrication device. Up to ten independent types of materials can be loaded in the printing workstation during one print run. That means experimenters can use different cell types or materials within a single test, Sanders says.

The machine can be loaded with up to ten different types of fluids for printing and is capable of printing organ structures down to a resolution of 20 µm in a 300 mm by 250 mm by 150 mm build volume. The workstation includes automated syringe exchange, automatic calibration of syringe tips, and a variety of utilities aimed at precisely leveling the print bed. The device also includes a live feed of the action as it happens.

Relying on its laser sensors, the robot arm can, for example, select a syringe from a storage rack and dispense organic materials in set amounts to build, from scratch, a functioning biological model.

For another type of experiment, the pick-and-place robotic nature of the arm allows tool to pick up a multi-well plate to begin an experiment.

“Within the wells, you can print 3D tissue structures, like a tissue scaffold, at a pretty small scale, and then you can print cells within that and do different co-culture experiments,” she adds. “So you can generate a working unit of an organ within each well and it’d be in 3D but at a very small scale.”

Or, researchers might print a single form of a 3D tissue structure to run analysis of different chemical structures within the wells, Sanders says.

“We print the tissues, perform the experiment, and a lid can be added to the plate. The entire experiment is done without anyone touching it,” she says.

Also important is the Tissue Structure Information Modeling (TSIM) software Advanced Solutions developed along with the hardware. That software acts as a CAD program for biology and calling upon graphical images rather than lines of manual codes.

With TSIM, researchers can scan organs and tissues, then use those scans to create and manipulate 3D models that the BioAssembly Bot prints for experiments, Sanders says.

Those models—along with 3D prints of those models—will one day be helpful in diagnosing patients, she says.

Because TSIM is integrated with the robotic assembly device, physicians and researchers can import patient-specific data sets from computer tomography scans or magnetic resonance images and generate 3D structures based on that data.

“There’s already a lot of work being done in 3D printing people’s tissues based on CT or MRI as a diagnostic tool and we fit well into that,” she says.

Alternatively, researchers can build their own model and assign various material properties to parts of the model, specify print parameters, and eventually hold in their hands a 3D version of the printed model.

The robotic device can also print from the stereolithography files other CAD systems generate for 3D printing, Sanders says.

Due to its flexibility—again, including its capability to print on contoured surfaced like the heart—the biological robotic assembly machine could one day operate within a patient, Sanders said. “If something needed to be printed in situ, that’s possible I think.

“Our long-reaching goal for this to directly affect patients,” she adds.

So you can generate a working unit of an organ within each well and it’d be in 3D but at a very small scale.Lehanna Sanders, Advanced Solutions Life Sciences