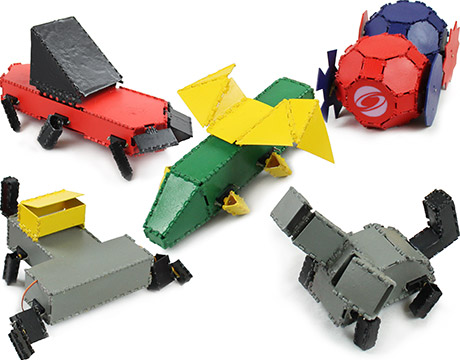 A Robot In Every Home

Daniela Rus, director of MIT’s Computer Science and Artificial Intelligence Laboratory (CSAIL), envisions a world where robots are as common as cell phones and can help people with almost every conceivable task. Her work has run the gamut from developing a robot chef to incorporating robots in the art of dance.

One project underway in the CSAIL lab that could put a robot in every home is the development of a system using a 3D printer that will let non-experts design and create miniature, origami-inspired robots from 2D designs in just a few hours.

“Typically, the process of making robots - from designing and modeling to fabricating and testing - can be slow, tedious and expensive,” said Ph.D. student Adriana Schulz, co-lead author of a paper describing the system recently published in the International Journal of Robotics Research.

The lab’s work could make “it easy for anyone to design and fabricate their own personal robot; a way to truly democratize the process of manufacturing useful objects like robots,” Rus says.

The Interactive Robogami system, as it is called, is a piece of software that enables non-experts to design and build their own customized walking and driving robots.

The system not only makes robots easier to customize but also allows the designer to determine both the robot’s movement and shape.

“Existing efforts to develop customizable robots usually separately consider the robot’s shape and movement,” Schulz said. “In other words, the robot’s mechanical structure is considered in isolation from the movement that you want it to do. A key innovation of our system is that we are combining geometry and motion, enabling you to design functional objects that are actually physically capable of being fabricated.”

The design can be created in just a few minutes and 3D printed and assembled in as little as four hours. The system also allows users to simulate the new device before fabrication to make sure the design meets the user’s specifications.

Interactive Robogami uses simulations and interactive feedback with algorithms for design composition so that users can focus on high-level conceptual design. The system has a library of more than 50 different bodies, wheels, legs and other peripherals, as well as a selection of different gaits from which the user can choose, doing for robotics much like what WordPress and others did for website building.

The system uses a 3D-print-and-fold technique, printing the design as flat and connected at joints, then folding the design into the final shape to become a 3D object.

The team tested the system among eight subjects who were given 20 minutes of training and asked to perform two tasks: create a mobile, stable car design in just 10 minutes and create a path through an obstacle course that would take a specified robot the least amount of time to travel through.

Six robots were fabricated, each taking 10 to 15 minutes to design, three to seven hours to print, and 30 to 90 minutes to assemble. The robots demonstrated a wide range of movement, such as walking on legs, stepping in different sequences, and using legs and wheels simultaneously.

The current version of the system works by selecting parts from a database and automatically implements the details required for fabrication.

“In the future we would like to extend this approach to handle more functionality beyond ground locomotion (such as flight) and to allow the system itself to automatically design robots based on a much more high-level request from the user,” Schulz says.

For example, another goal is to enable the user to go into the system, define the behavior of the robot in terms of tasks it can perform, and have the system do the rest.

“This project is exciting because robots are complex systems that normally require years of experience to customize,” Rus said. “Our tool makes it possible for anyone to design a robot in as little as 15 minutes.”

For Further Discussion
This project is exciting because robots are complex systems that normally require years of experience to customize. Daniela Rus, Director CSAIL