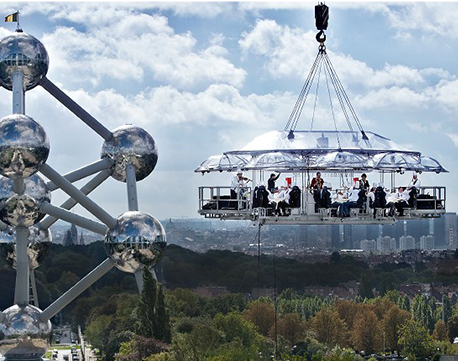 Image: Dinner in the Sky

A Restaurant in the Sky

Does the braised lamb in balsamic reduction and the side of Gruyere with pear confit taste better when eaten at BASE-jumping heights? If you’re willing to fork over $500 to Dinner in the Sky, you can find out. The company has dangled gourmands—on dining platforms hung from cranes—180 feet in the air in 40 different countries.

How did the company reach such heights? The concept and the actualization come from Belgian Stefan Kerkhofs. Kerkhofs had the good luck to grow up surrounded by cranes. His family owned a construction company. “As a child I was always fascinated,” he says. “You can do more with a crane than only things in the construction world. At that time bungee jumping came out. We had the crane, and we could do with it whatever we wanted—a dream for a child.”

A more fully-grown Kerkhofs worked for the family company for five years. But when, in 1991, they sold it, he decided to turn what had been the off-hour hobby with cranes into the business itself. He started the Fun Group, where he used cranes to let paying bungee jumpers hurl themselves to the earth, catapulted other projectile-oriented thrill seekers, and also dropped a few cars.

For those more interested in going up than down, or across, Kerkhofs created a kind of viewing platform. “It could hold 24 people, giving them a chance to look around, sort of a viewing box.” It wasat a party of such view seekers that the seed for food at great heights was first planted. “I was going up with a friend, and he proposed to me it that it would be a wonderful idea, when sitting at this level, to have the possibility of eating and drinking. Ok, we eat, we drink. Then who makes dinner? Ok, let’s make dinner in the sky-platform. So Dinner in the Sky was born.”

Kerkhofs had the crane experience to make it happen. He teamed up with publicist guru David Ghysels to make it happen in a big way. Run by the duo, the company has a unique production process. “It’s simple how it works. Mostly I’m the dreamer, the guy with most crazy ideas. We dream out loud and then explain our dreams to the team, and it’s up to them to make the dreams come true. It’s strange to tell it that way, but it’s really how it goes,” says Kerkhofs. “We are like children in the garden. We can play and create things no else has created.”

Those kids in their garden managed to find a way to create a five-ton platform (seven when filled with the staff of five and their 22 guests) that hangs from a 120-ton crane. And safely, of course, according to the code of whatever country it is in. “This was not so simple,” says Kerkhofs, “because the rules are not the same for every country.” In fact, Dinner in the Sky is a unique enough attraction that rules have to be created for it alone. “That means we are always trying to get the local authorities to see if they need more information—you must be open to showing as much information as you have.”

The biggest engineering challenge of designing the gastronomical ride was not how to put people in the air but how to quickly put the entire rig on the road. “The most difficult thing was to make it easy to set it up and break it down,” he says. The platform, when suspended, is nine by five meters. On the road it’s six by two-and-a-half. The whole shebang can be assembled in two hours and disassembled in one. “The Dinner in the sky framework is made out steel and everything is designed in a way that you only need one tool for set up and break down. All materials slide in and fold down in a way that you end up with a structure that you can transport on the back of a regular trailer,” he adds.

Kerkhofs says that 98% of the ideas he decides to commit to paper become a reality. He attributes this success rate to his 15 years of professionally playing with cranes. “I’m not an engineer, but I grew up between cranes and the construction world. There is no school for learning how you must work with these activities.” Kerkhofs’ and Ghysels’ team does, of course, include a handful of degreed engineers and a few designers as well.

Kerkhofs’ useful experience extends far beyond the mechanics of how to hoist with a crane, into areas like the psychology of the consumer. For instance, by any engineer’s calculations, four cables would be more than sufficient to safely hold the dining platform. But Kerkhofs uses eight. “Four is good, but eight makes people trusting, they feel secure when they see extra security.”

He also knows that not everyone is the model customer. The seats, tables, and the experience itself are designed accordingly. “You always have people who behave not how we want,” he says. So bags are not allowed up on the platform. The six-point security-belts buckle on the back of the seat, out of reach.

The vast majority of Kerkhofs’ customers behave quite well, though. “People behave at heights. You can have the biggest playboy, the biggest macho guy. Go five meters high and he’s like a child. You say shut up then they shut up. It’s not a normal experience; they’re not used to it. So we are a little bit the boss in the sky.”

That’s not to say Kerkhofs has any delusions of power. “We don’t feel ourselves as God—totally not,” he says. “We are not God, but we bring them closer to God.”

For Further Discussion
I’m not an engineer, but I grew up between cranes and the construction world. There is no school for learning how you must work with these activities.Stefan Kerkhofs, co-founder, Dinner in the Sky