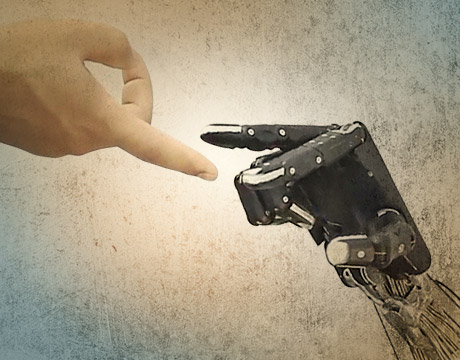 Vikash Kumar, a University of Washington doctoral student in computer science and engineering, is part of a team of researchers making great strides in developing a robot for a human body part that is one of the most difficult areas to replicate with the same functionality: the hand.

Kumar grew interested in robotics after becoming disillusioned with the study of mathematics because it was only about numbers and equations on the board and on paper. “The only way I could appreciate those things was if I could use them in a real-world application. That’s when I saw robotics as a means to channel all my learning into something tangible,” Kumar says.

I saw robotics as a means to channel all my learning into something tangible.
Vikash Kumar, University of Washington

After earning his bachelor’s and master’s degrees at the Indian Institute of Technology Kharagpur, he enrolled at UW to study for his doctorate working in the university’s Movement Control Lab under the supervision of Professor Emanuel Todorov.

The five-fingered hand he and Todorov have built is a breakthrough because it can perform tasks that require highly dexterous manipulation, which traditionally has been very difficult for robots, plus it also can learn from its own experience and build upon that learning without ongoing human direction.

Most work with commercial robots has involved software engineers imagining every movement to perform a specific task and then programming those movements. Because of machine-learning algorithms that help the robot model both the basic physics involved and plan which actions it should take to achieve the desired result, the robot gets progressively more adept each time it performs a specific task, eventually learning by experience to respond as quickly as, or even faster than, a human hand.

Starting in 2011, Kumar spent two and a half years designing the hand, which has 40 tendons, 24 joints, and more than 130 sensors. Then he turned to working with different methods of controlling the hand. “I eventually ended up with combining both optimal control and the learning-based method because [combining them] has produced a much better result,” he explains. The benefit is that the kind of task that used to take thousands and thousands of trials of iterations now takes orders of magnitude less trial and less data, and this combination gives us an efficient way of learning, he adds.

The eventual goal is to have a functional equivalent of the human hand. The grand vision is to have robots mimic more closely what nature has done in creating what an animal can do, he said. “We are on the right track. It will be just a matter of time before we get there,” says Kumar.

“Now we have tools good at solving one particular job: a copy machine, a dishwasher, a washing machine. Soon you realize that every task you have to solve is asking for another piece of hardware. That’s why a robotic butler is something in the grand vision of robotics because that is one machine that does all the household chores for you,” Kumar says. “That’s why it’s important to get a functional equivalent of a human hand because the human hand is capable of solving various different tasks; it’s capable of peeling a label, capable of loading a dishwasher, capable of assembling IKEA furniture. But any one robot right now is good at only one of those.”

To date, the team has demonstrated local learning with the robot, meaning that the hand learns from and improves by performing a task repeatedly. The next step is to tackle global learning, in other words, have the robot figure out how to perform a task with an unfamiliar object or in a new situation it hasn’t faced before.

Kumar envisions endless possible end uses eventually for the basic technology, everything from defusing explosive devices to prosthetics to space or marine exploration to disaster recovery to health care. But his team’s focus will continue to be on developing the fundamental building blocks that underlie all the possible uses, making sure that all the steps involved are in the right sequence.

As excited as he is about the breakthrough work his team is doing, he is more excited to see where other scientists around the world may take the basic capability and begin to collaborate and combine their individual expertise for specific uses. He acknowledges that it’s not something that is going to happen overnight. “It’s not going to be one day or one month where we say it doesn’t work until it works. It’s a gradual process, probably five to ten years,” Kumar says.

But he does expect to see more results starting to come pretty soon as “more people jump in now that the problem seems more tractable. We will start to have small but gradual progress from now onwards.”