A Ramp to Change

A Ramp to Change 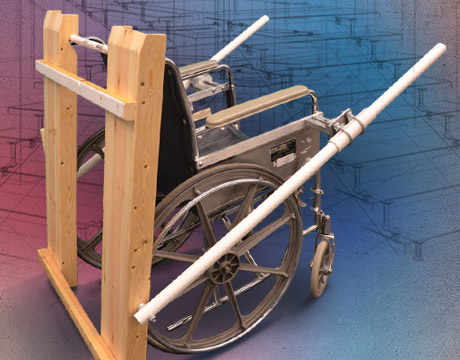 Many wheelchair users unfortunately find that there isn’t a ramp to help them get to their destination. A group of undergraduate students at Michigan State University hopes to remedy this with the “Go Ramp.”

Zachary Tuller, a mechanical engineering major at MSU, says his team’s initial concepts for the ramp were to have a system that would unfold from underneath the wheelchair. “But once we started, trying to figure out how everything would fit, it became harder,” he says. “We started mounting onto the sides and the back of wheelchair. We wanted it to be completely powered by the user so we didn’t want things like servos. The final design is a ramp that mounts onto the back of the wheelchair, that attaches farther up with arms and these arms can glide and pivot while being attached to the wheelchair, he says.

“In order to use the device, you lift the ramp and then can grab a hold of the arms and maneuver the ramp in front of you,” he says. “Once up on the curb or once down on the curb, you pull on the arms to bring the ramp back into a vertical position.” He says they also found that if the user rolls the chair a little it makes it even easier. “If you have the ramps contacting the wheels, then friction can come into play between the two to lift ramps higher or lower,” he says,

The ramp’s material is wood presently, and the two arms are made out of PVC pipe. Tuller estimates that you can use Go Ramp on an up or down curve in about 20-30 seconds. “That includes time to deploy the Go Ramp and to fold it back up onto the wheelchair,” he adds.

Tuller gained insight not just from the work but also the reactions of users. “It was interesting to get comments from people in wheelchairs but you also learn to deal with skepticism,” he says. “You learn that can come with the process.”

Tamara Reid Bush, the assistant professor of mechanical engineering who taught the class Go Ramp came out of, says she’s been encouraged by the results to this point. “Think of how many places that aren’t to code for people in wheelchairs. I believe if Go Ramp is manufactured out of a material like a composite and worked out of a slider system, then it has a chance to be very effective. The ease of use and weight ratio could both be improved, but it’s exciting to think of the added independence it could give.”

She also stresses how this kind of innovation helps students blossom. “I gave them such a hard time about the initial ideas they came up with and they took that challenge and came up with this,” she says. “When a student can see just how much potential there is for their product, that can get them excited and students can blossom.”

Learn about the latest developments in medical devices at ASME’s Global Congress onNanoEngineering for Medicine and Biology.

For Further Discussion
It was interesting to get comments from people in wheelchairs but you also learn to deal with skepticism. You learn that can come with the process.Zachary Tuller, Michigan State University