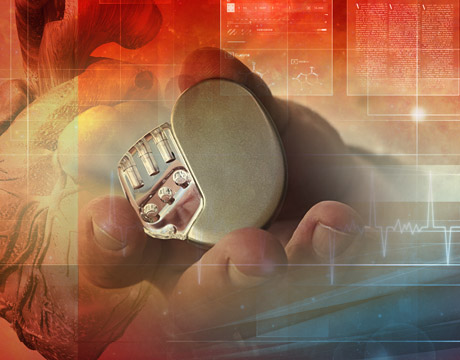 A Model to Keep Pace

There are few organs more critical to human life than the heart. And, therefore, you could argue that there have been few inventions that have helped humanity more than the pacemaker, a creation that’s been around for decades and has become so common it is almost taken for granted.

Unfortunately, they don’t work well with some patients’ biologies, a sad situation when the device has been a success for so many. This is why Adarsh Krishnamurthy, an assistant professor of mechanical engineering at Iowa State University, puts his own heart into understanding why these failures happen with this medical marvel.

“I started working on this in 2010 and was looking at modeling when it comes to pacemakers`; looking at a situation where the heart is not pumping blood,” explains Krishnamuthy. “Each cycle should actually be fifty to seventy five percent [capacity] in healthy humans but, when it comes to these patients, it’s more like twenty to thirty percent. The body still needs blood to be pumped so the heart in these patients grows bigger and leads to dilation and can lead to heart failure.”

The heart sometimes shrinks back but in roughly thirty percent of patients there isn’t a real advantage to being given the famed invention, he says. “Yes, you can actually say that the pacemaker doesn’t really help them,” he says. “It’s so important to see if the data can shed more light here.”

Measuring dimensions, Krishnamuthy’s team tried to create a computational model before and after the pacemaker was put in, he says, and then simulated the baseline and therapy. “We looked at the distribution of work being done by each of these heart muscles,” he says.

One challenge was obtaining the clinical data for patients and the follow-up. “This was difficult because we had to collect data from CT scans, echocardiography, and electro-anatomic mapping,” he says. “All of them were obtained from the patient by different departments and at different times. Hence, we had to collect and sort through the data. Even after that, we had to get the doctor’s expertise in picking the correct value when the data from two different modalities did not match.”

A future goal of this work is to figure out the benefit of having a patient come in to take certain types of measurements. And Krishnamurthy will keep at his work, understanding the importance of not just creating new inventions in this area, but trying to improve the ones that already exist. “A pacemaker has made a difference for so many,” he says. “We just want to increase the population that can benefit.”

A pacemaker has made a difference for so many. We just want to increase the population that can benefit.Prof. Adarsh Krishnamurthy, Iowa State University