A Mini-Sensor for Brain Scanning

A Mini-Sensor for Brain Scanning 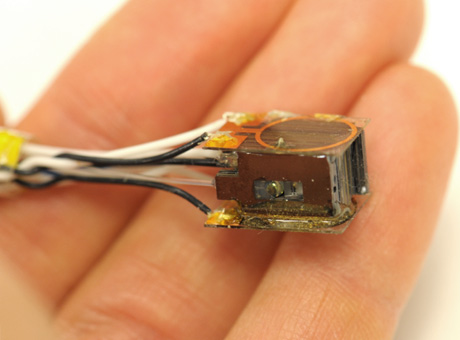 Magnetoencephalography is a non-invasive means for monitoring brain activity. The electrical signals that course through the brain, like every electric current, generate a magnetic field, and that magnetism can be picked up by special sensors. But while MEG has many actual (and potential) applications, the current means for picking up the weak magnetic signature involves donning a large, cryogenically cooled helmet.

Recently, researchers at the Physikalisch Technische Bundesanstalt in Berlin, Germany, conducted experiments intended to demonstrate that the cumbersome helmet could be replaced by a sensor the size of a sugar cube.

The German scientists, together with researchers from the U.S. National Institute of Standards and Technology in Boulder, CO, where the device was developed, measured the alpha waves in the brain that were produced in conjunction with a test subject opening and closing his eyes.

Up until now, researchers wanting to study brain signals with great sensitivity relied on a superconducting quantum interference device, or SQUID. These devices use loops of high-temperature superconductors to measure minuscule changes in magnetic fields; as the magnetic flux passes through one of the loops, it induces a change in the flow of electricity through the circuit. Using specially shielded rooms and loops cooled to 4 K, an array of SQUID sensors can detect the magnetic fields created by the electrical signals from as few as 50,000 neurons firing.

The new PTB/NIST sensor isn't that sensitive, but it has two huge advantages over SQUID helmets: it's cheaper and it works at room temperature. It also relies on a different means to detect magnetic fields. The active sensing material is a cloud of 100 billion atoms of rubidium. A property of rubidium is that its ability to absorb infrared light increases if it is in a magnetic field. The sensor illuminates the rubidium gas with an infrared laser and then measures how much light passes through; the less light, the greater the magnetic field.

In tests conducted in a magnetically shielded lab in Berlin, the rubidium cloud sensor was able to detect a magnetic field measuring one-trillionth of a tesla. That's still a factor of ten less sensitive than a SQUID device, but NIST researchers are hoping to improve the sensitivity of the light detectors in order to match the SQUID-based MEG.

If a cheap and portable non-SQUID magnetoencephalography can be perfected, researchers hope that it will be able to open up new ways to understand what's going on inside our heads. Not only could such a sensor be used to map the brain in advance of surgery, but it could become the basis of a computer interface that uses brainwaves to control machines.

To read the latest issue of Mechanical Engineering, click here.

The new PTB/NIST sensor isn’t that sensitive, but it has two huge advantages over SQUID helmets: it’s cheaper and it works at room temperature.