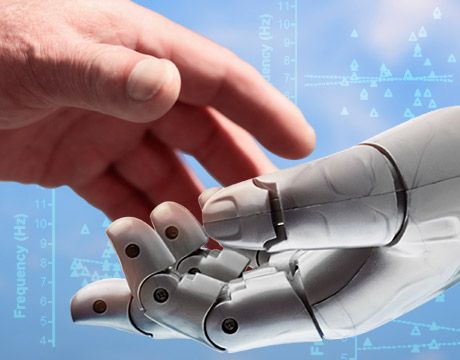 It can be easy to take things for granted. You go to the library, you grab a book, and start reading, never appreciating the action. Not the reading of the book itself—but the fact that you just grabbed something.

Even just gripping an object, something most of us do every day without thinking about it, can be a monumental struggle for others. Surabhi Mundada, a high school student, took on the challenge of trying to make a difference in those people’s lives.

“I’ve been part of numerous science projects. I never delved into programming and robotics, but I was interested in bioengineering,” she says. “I saw gripping was an area that was a big problem for many. I wanted to make something to wear that could help with issues like tremors.”

Starting work on “MyGlove” in November 2014 while still a sophomore at Olympia High School in Olympia, WA, she had high hopes, but just as importantly, patience. And this past fall, she became a Google Science Fair finalist.

For initial research, she delved into issues such as what kind of hand impairments existed and how they affected those who were suffering. “I also researched what kind of sensors could be used for impaired movements and other areas,” she says. “I also made multiple test plans and diagrams. Many things got my creativity going.”

She quickly saw creating the glove meant dealing with a learning curve. “I didn’t have expertise but found guidance on it through the internet and open source. Arduino can help your learning,” she says. “I also didn’t know a lot about robotics so it was hard to figure out which parts were causing issues. I overcame it partly with systematic debugging and taking it one step at a time.”

MyGlove uses sensors and servos based on sensor data. “It moves and improves hand movement and reduces time to close the hand for a variety of objects. It can hold something as delicate as a Styrofoam cup,” she says. “MyGlove can detect tremors through sensors and then indicate whether the tremor is happening by LEDs. And MyGlove can control tremors with actuators that affect the amplitude.”

Her invention also placed high at the Intel International Science and Engineering Fair in the robotics and intelligent machines category, and it may just be that the sky’s the limit. “I would like to see MyGlove be connected to an app for patients and doctors to monitor and for self diagnosis,” she says. “I can see the technology being applied for other medical usages because there are multiple applications in the way it uses soft robotics. Since it has tremor control in mind, it could probably help for other symptom control and possibly for other medical conditions to assist with different impairments. I would love to see just how many people this could help.”

Growing with the Experience

But beyond the possibilities of her invention are the experiences she takes with her.

“I learned so much about the mechanical aspects and, since this was an engineering project, how to systematically approach problems,” she says. “This is engineering and any obstacle can pop up and you have to take it on. I learned to plan ahead, be prepared and have perseverance. It’s fun to create something and see how you can improve it.”

Learn about the latest trends in biomedical devices at ASME’sNEMBConference.

I would love to see just how many people this could help. Surabhi Mundada, high school student