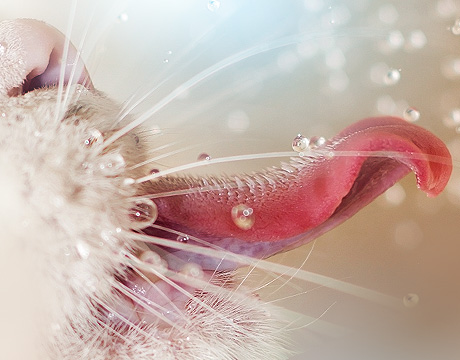 Like Velcro, cat tongues are covered in sharp, tiny spines.

A Feel for Feline Innovation

An inventive moment can happen anywhere. At work. Out on a walk. Even, playing with a cat. Alexis Noel had been spending time with a family feline, “Murphy,” which led to her breakthrough.

“The cat jumped on me and started licking a microfiber blanket,” says Alexis Noel, a Georgia Tech Ph.D. candidate in mechanical engineering. “It got its tongue stuck and couldn’t get its tongue away from it. I got the blanket off the tongue and wondered why it happened. Conventional wisdom is a cat’s tongue is like sandpaper, it’s rough.”

This led her into the cat tongue research project, which teamed her with David Hu, her research advisor.

Examining cat tongue samples, Noel employed macro photography and 3D scans. “I saw tiny little hooks kind of made out of cat claws,” she explains. “The tongue is like VELCRO. It can grab on to loops and tangles but, it’s interesting, since tiny hooks embedded in soft tissue can tease apart knots like a hairbrush. It’s an interaction of small spines. This may have many applications.”

She actually ended up creating what, as far as she knows, is the world’s first 3D printed cat tongue mimic. “I thought it would be helpful to have this to test,” she says. “Using 3D printing techniques including stereolithography and silicon molding, the mimic [that was printed] was actually four times the size of a cat tongue. In the last couple of weeks, we even got a sample of a tiger tongue and found the spines on the surface of the tongue are the exact same size as a house cat. We found why they are the same size: this tongue exerts exactly the same pressure on its fur as a house cat because it doesn’t want to damage its skin when grooming itself.” For stereolithography, she used the Formlabs desktop machine, which created the high-resolution spines, with resolution down to 30 microns.

The next step before publishing this work, she says, focuses on puncture forces. “The spines on the tongue may look a lot like cat claws and end at a peak but spines on the tongue are blunted,” she says. “We believe this is so it doesn’t puncture its skin when grooming its own fur but retains shape to get meat and fat off of bones. We will be going through some things to see if we can prove this puncture theory relationship.”

Among possibilities for applications? Novel wound cleaning devices for the medical field, she says. “Cats are known for cleaning their own wounds and their saliva is an antiseptic,” Noel says. “Maybe the findings could help with the ridding of dirt from wounds, maybe for soft robotic medical applications. When you think of soft robots, you may think of robotic dragonflies or soft, squishy jellyfish, but also think about the manufacturing side of robotics. How do you grab things softly so you don’t crush it? A great application could be using these malleable spines to grab rust surfaces, like grabbing rocks in space. Maybe in the future you could go into meteorite mining and grab onto as much surface as possible.”

Regardless, she hopes this is the tip of the iceberg of her cat work. “We know so much about cats and it just reminds you how resourceful they are,” she says. “We know cats jump from high heights, twist their body and land on their feet. They have impeccable hearing and their whiskers can detect the slightest forces in the surrounding area. I’d like to be a part of finding out more about how the cat form has evolved over time to become the super cleaner or super hunter. You’d have to think they could teach us a great deal.”

For Further Discussion
I’d like to be a part of finding out more about how the cat form has evolved over time to become the super cleaner or super hunter.Alexis Noel, Georgia Tech University