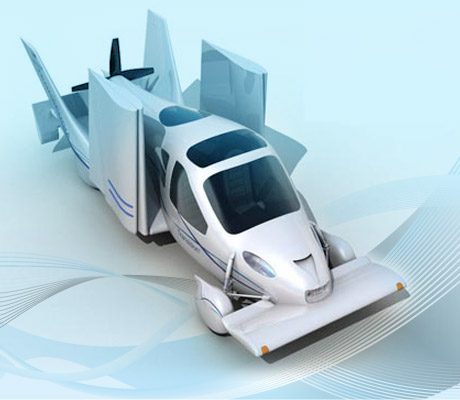 A Car That's Ready for Takeoff

When you talk about the Transition, created by Terrafugia, Woburn, MA, it isn't too long before someone mentions "The Jetsons." But you won't hear the founder of the company start humming the theme song just yet. Aerospace engineer Carl Dietrich is quick to caution that his company's invention of a 115-mph hybrid plane-car will not be leading to everyone literally flying to work in the next five years. Still, when you mention 40 years, he pauses. Could it be the start of a revolution? "It has that possibility," he says. "We're rolling it out slowly through people making orders. If we can get 80 a year, we turn a profit. Can it grow from that? I don't see why not."

Neither does futurist and former Jet Propulsion Lab Fellow David Brin. He points out that those who can afford the finer things often lead the way. With a retail price between $200,000 and $250,000, it will clearly be a select group to take the Transition leap. "This will definitely appeal," Brin says. "It partly comes from the problems in airline service. The well-off no longer fly commercial like they used to. This is a side effect of 9/11. They don't want to deal with things like frisking. When a means of travel is abandoned by the wealthy, it rapidly deteriorates. It happened to the railroads after World War II. It can happen again."

Of course, the change may go beyond the present transportation industry, as roads could suddenly have less traffic. But before you conjure images of the skies being bumper to bumper, Dietrich is quick to point out that local airports have a large amount of room for flights. "There would need to be a ton of these kinds of aircraft in the air before congestion would ever be a factor," he says. "It's amazing to even think of that."

You could easily cast the Transition aside as a fad except it has some true values beyond simple diversion. First, an oncoming delay doesn't ground you, as you just put down the wings and drive. Next, with approximately 700 feet to take off, the runway would only need to be a minimum of 3,000 feet to get back in the air, says Richard Gersh, Terrafugiavice presidentof business development. That does not require a superior airport. It also brings up the point of when less runway will eventually be needed—could you one day find yourself sitting in highway gridlock, press a button, and be in the skies while everyone else hopes they get that congestion-building traffic accident cleared? Suddenly the first letter in the GPS acronym is seen in a whole new light.

Beyond its attempt at furthering convenience, it can fit in well with the Green Revolution, says Dr. Joseph Vaughan, assistant research professor in the department of civic and environmental engineering at Washington State University. "If we are shifting the emission where roughly the same distribution in the chemical species is now not at street level, certainly it would lessen the immediate exposure in air pollution," Vaughan says. "We create local hotspots of carbon monoxide so if you move it up into the sky you have less of a problem for people who are breathing locally. It would disperse better because there's more wind up there."

Still, Vaughan sees a potential problem since fliers will be going greater distances in the same period of time. "The emissions aren't as harmful but now it will be put out there for 100 miles in the same time that they'd only emit for maybe 50 driving," he says. "You also have to consider the amount of fuel that will be used." With only room for two passengers, it doesn't exactly create a bulk rate in this regard for the health of Mother Earth.

But there are also economic benefits, especially as the model price slowly lowers. For example, there is no hangar cost, as you simply drive your car over from your home when it's time to fly. Dietrich estimates if you bill out at more than $300 per hour in your profession, it's not just a convenience, it can actually make you money just in saved work time. Dietrich sees its revolutionary chance particularly for the 50-to-450-mile trip. "Seven percent of all trips taken are in that travel distance range," he says. "It isn't well served by airlines or cars."

No one can say for sure when we'll all be flying through life but there's no question that attempts such as the Transition bring us closer. For a world that thrives on being connected, it's a natural extension. Nonetheless, it will also only go as far as people are willing to go in terms of pilot's licenses and embracing the lifestyle that comes from maintaining a high-tech machine. The FAA doesn't regulate cars but it will regulate the Transition. Your usual oil change place will also not get the job done. And, unless the machines become automated, the human element could become a concern with so many new pilots in the skies. After all, not everyone is naturally Captain Sully.

Still, think of it this way—if the flying car ever becomes the norm, it could lead to another life-changing revolution: floating billboards.

Eric Butterman is an independent writer. Portions of the article were first published in Departures in 2011.

When a means of travel is abandoned by the wealthy, it rapidly deteriorates. It happened to the railroads after World War II. It can happen again.David Brin, futurist, former Fellow, Jet Propulsion Laboratory