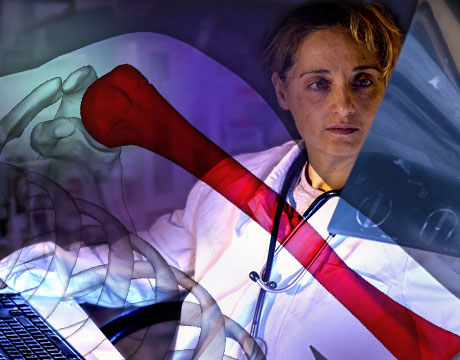 A 3D Look at Bones

Prof. Kenji Shimada didn’t exactly have a large amount of medical knowledge when acquaintances at a hospital encouraged him to help create a way to see bones three-dimensionally. “X-rays give you a two-dimensional look and doctors should be commended on how consistent in assessment they are able to be based on that,” says Shimada, a professor of engineering in the mechanical engineering department at Carnegie Mellon University. “Still, I believe being able to see it three-dimensionally is more consistent.”

Shimada was a part of a group working on a software algorithm to try and make 3D a reality. “It really started with realizing how orthopedics may be the closest of all medical areas to mechanical engineering because it looks at the things like the structural component of the body and stresses. We were shown a procedure that essentially involved cutting bones and they take X-rays frequently to make sure everything is moving in the right direction. We thought we could create software that could read the frontal and side images and if you give a computer an algorithm with a template then the computer would figure out what the patient’s bone should look like.”

Shimada compares the process to what the likes of companies such as Boeing experience. “When you look at the 3D modeling for airplanes and cars that mechanical engineering has done, there’s a lot that fits with medical,” he says. “I’m surprised more people don’t think of it that way.”

Using implants as an example, Shimada says you want to make sure loading access is properly aligned so when you have a complete 3D bone CAD model you can simulate the operations. “People can specify hip implants that can potentially be a more exact fit when you’re talking about the existing bone structure and think of how that can potentially affect the chances for success,” he says.

Shimada said one of the most difficult parts of the project for him was the learning process. “You find yourself constantly reading up on the medical side,” he says. “You’re starting from scratch and jumping into new topics. But that can also be exciting.”

Shimada says another medical project he has high hopes for based on the positive results of this 3D project is simulation through computation for abdominal aneurysms. “In engineering, we simulate first the behavior before we start cutting into it, so I think one big way we can contribute to medical from mechanical engineering is the computation of simulation,” he says. “It’s looking at structural, fluid, heat transfer, and more. Like working with the bending of a wing and the air around it, we can assess aspects such as blood flow.”

Learn more about the cross-disciplinary nature of 3D technology at theAM3DConference and Expo.

For Further Discussion
When you look at the 3D modeling for airplanes and cars that mechanical engineering has done, there’s a lot that fits with medical. I’m surprised more people don’t think of it that way.Prof. Kenji Shimada, Carnegie Mellon University