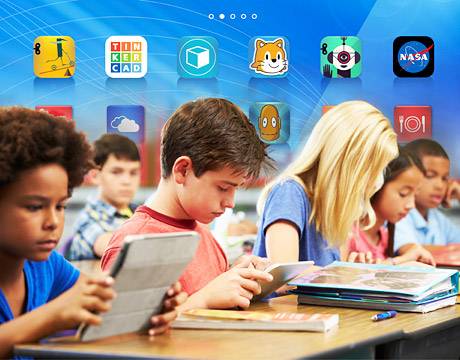 Like everything else, technology has transformed education. Students’ backpacks don’t just include pencils and notebooks anymore, but also chromebooks and tablets. Although some parents may argue those gadgets are distracting them from their studies, there is no denying that technology is also enabling greater learning for kids of all ages.

There are hundreds of apps available on iPhones and Android devices that are making science, technology, engineering, and math (STEM) fun for kids. Although apps can’t replace traditional teaching methods, they represent the kind of self-paced learning that’s guided by technology. By enabling interactive learning, apps can spark an interest in students for STEM-related careers at an early age.

Here are seven mobile apps that are enabling STEM education. Some of these apps follow a games-based approach, while others use videos or quizzes as the medium for teaching STEM concepts. One thing all of these apps have in common, however, is making the learning experience interactive and engaging for kids.

Kids can discover how machines work or conduct their own experiments by exploring the playful side of physics in the Simple Machines app that features six machines: levers, pulleys, inclined planes, wedges, wheels and axels, and screws. They can alter and test each machine to learn about force and motion, actions and reactions, inputs and outputs, conservation of energy, and mechanical advantages. The app also offers a free handbook download for better understanding of the concepts.

Created by a former Google engineer, the 3D design app Tinkercad helps create and print 3D models. With its simple and intuitive interface, this browser-based app could be a first step in computer aided design (CAD) for makers of all ages. Tinkercad seems suitable for middle- and high-school kids aiming to learn CAD skills and apply them for professional design, just like the tween Ritik Mehta did to create 3D glasses.

Another app that encourages creativity in 3D printing for children is Blokify. It’s a block-based 3D modeling software that enables kids to make virtual things on their iPhone or iPad, and then get them printed out as physical models, either on their own 3D printer or through Blokify’s service. Since it only allows users to build with cubes, it’s a lot like building with LEGOs or in Minecraft, making the app fun and educational at the same time.

A collaboration between the Lifelong Kindergarten research group at the MIT Media Lab, the Developmental Technologies research group at Tufts University, and the Playful Invention Company, Scratch Jr. was inspired by the popular Scratch programming language. The app helps young children learn coding as they program their own interactive stories and games. By snapping together graphical programming blocks and using math and language, children can make characters move, jump, dance, and sing. In the process, they learn to solve problems and design projects.

Most kids love humanoid robots and now they can design their own bots with exoskeletons, zephyr mechanisms, hydrostatic tentacles, G-Force mixers, monster feet, megascopes, hooks, magnets, and more with the Robot Factory app. Once a robot is ready, its ability to move, jump, and avoid obstacles can be tested in a physics-based obstacle course. This award-winning educational app teaches kids problem-solving aimed at improving their designs and testing how far their robot can run before it runs out of health.

From solar systems to space shuttles, this official NASA app showcases thousands of images and videos from around the agency. Besides being a repository of spectacular images and videos, this frequently updated app also offers space-focused content including engaging features and news stories. Tapping on an image pulls up an in-depth article about each NASA mission. With a portal to NASA TV and radio, and a live stream of tweets (even from space), this app will appeal to all space nerds.

Available for both Android and iOS, BrainPop uses the visual medium of movies to keep students engaged in hundreds of topics, including STEM. Aimed at students, the app features a new animated documentary every day, followed by quizzes and games related to the topic that help kids connect the scientific concepts to the real world. As a middle-school teacher explains in her blog, the app inspired kids in her class to follow the scientific method for problem-solving.

For Further Discussion
By enabling interactive learning, apps can spark an interest in students for STEM-related careers at an early age.