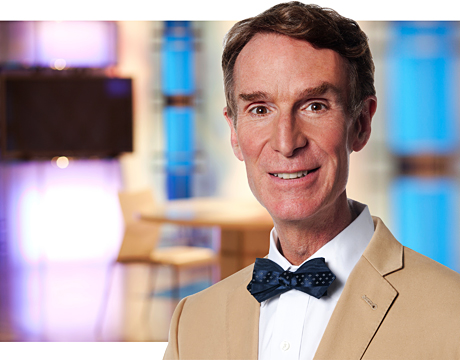 Twenty years ago, mechanical engineer Bill Nye began encouraging a generation of pre-teens to become scientists and engineers with his fast-paced (and often very funny) educational show, Bill Nye the Science Guy. Recently, he won rave reviews on Dancing with the Stars as a robot after a knee injury immobilized his leg. He is CEO of The Planetary Society and the 2012 recipient of ASME’s Ralph Coats Roe Medal for communicating about engineering.

How did a Boeing engineer wind up doing standup? B.N: I was working on 747 hydraulic systems, and my friends pressured me to enter a Steve Martin look-alike contest. I did not look like him, but I thought I understood what Martin was driving at. After I won, I started doing standup. I would work at the drawing board during the day, take a nap, and then do standup at night.

Why did you leave your secure, well-paying day job? B.N: I had switched jobs and got disenchanted. I was working for guys who were obsessed with making money every quarter. You can do that with paper towels, but not when you are trying to design a 30 percent smaller laser gyroscope. I had enough money in the bank to live for six months, and I was earning some money writing jokes for a local comedy show. I decided that if I didn’t do it now, I never would.

How did you get your big break? B.N: The show had a last-minute cancellation, and we had to fill several minutes. I was always talking about my work as a volunteer demonstrator at the Pacific Science Center, and the show’s host suggested I do something with that. So I did Household Uses of Liquid Nitrogen, where I roasted marshmallows in nitrogen and breathed smoke out my nose after I ate them, and froze an onion so it sounded like breaking glass when I cut it with a knife. The studio audience thought it was funny.

That was the birth of Bill Nye, the Science Guy.

What have you learned about popularizing science and engineering for more than 25 years? B.N: It has to be entertaining first. I’ve gotten into arguments with people who consider themselves experts on education about this. But I believe that if you want to teach something, you have to entertain people, and the best way is to make them laugh. Second, you have to show the phenomenon, then tell about it. This sounds obvious, but it’s not. Don Herbert—Mr. Wizard— encouraged a generation of scientists and engineers by doing this.

What does the public want to know? What don’t they get? B.N: They want to understand everything. I’m working on a book about energy for grownups. Most people I meet don’t really grasp the concept of how much energy we need. Try to push a car 25 miles to get an idea of how much energy is in a gallon of gasoline.

Yet many engineers feel they cannot get through to the public. Why? B.N: The trouble with engineers is that many of us are know-it-alls. We don’t get the passion. Take Faraday’s discovery that moving magnetic fields make electrical current, or Darwin’s discovery of evolution without knowing about DNA. These are astonishing things. We shouldn’t take them for granted. We need to connect with the passion, beauty, and joy.

Would you have been satisfied remaining at Boeing? B.N: I would probably have become a manager, married a nurse, and had a couple of kids that went to the neighborhood school. I may have been satisfied, but I was restless and young, and tried something else.

For Further Discussion
I did ‘Household Uses of Liquid Nitrogen,’ where I roasted marshmallows in nitrogen and breathed smoke out my nose after I ate them … The studio audience thought it was funny.Bill Nye