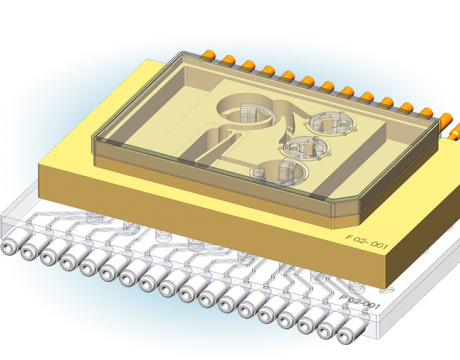 7 Human Organs on One Chip

Scientists in the U.S. and U.K. have recently grown seven miniature human organs and housed them together on a chip to create a "human-on-a-chip," a whole body biomimetic device. These clusters of assembled cells mimic how organs in the body function, both separately and in tandem.

The chip could take the place of animal and tissue testing for drugs in pharmaceutical development, say its creators. It will have to win regulatory approval in each country looking to use it for tests, and it could allow for insights into how organs interact, says Linda Griffith, professor of biological and mechanical engineering at the Massachusetts Institute of Technology.

Griffith heads The PhysioMimetics program at MIT, which has collaborated with CN Bio Innovations, a British company that creates live organ-on-a-chip devices. The $26.3-million development program is funded by the Defense Advanced Research Projects Agency.

“Drug companies have a pipeline and we’re adding to the tools in their pipeline,” Griffith says. “What we’re building is adding to the capability to bring part of a clinical trial further into the lab. So, before your go to (testing with) people, you’re actually trying to bring the people into the lab in miniature form and test things on them.”

Labs are already using single organs on a chip to test their drugs. The techniques used to make those organs are the same as those used to create the human system, she says.

Researchers and companies have previously grown a liver, a lung, and part of the gut on similar chips,but this is first time seven major organs have been combined to create a functioning human micro-system that mimics human physiology, Griffith says.

The concept follows the lab-on-a-chip devices that scale single or multiple lab processes down to chip-format, and takes that concept into the medical realm.

MIT and the English company created the computer-memory-stick-sized chip from a flexible polymer that features microfluidic channels and seven deep wells that host the organ material. The wells are populated with living organ tissue grown from stem cells or collected during surgery and are then are grown on three-dimensional scaffolds that allow the tissues to adopt the natural 3D structures found in the human body, Sceats says.

As in the body, the organs on the chip are supplied with oxygen and food via circulating oxygen-rich fluid pumped through the channels.

Researchers will be able to monitor the effects of drugs on chip and look to see is a drug is toxic or beneficial for different organs or the system as a whole, Griffith says.

Sceats hopes that the multi-organ device can improve treatments for liver diseases. As of now, a liver transplant is the only way to treat the disease and that comes with multiple complications and the need for a donor, she says.

The developers have been careful to ensure the chips can be adapted to integrate future technologies, such as advances in stem cell technologies and personalized medicine that populate the chip with the patient’s own cells to test or create medicine for their own, unique bodily environment, Griffith says.

What we’re building is adding to the capability to bring part of a clinical trial further into the lab. So, before your go to (testing with) people, you’re actually trying to bring the people into the lab in miniature form and test things on them.Prof. Linda Griffith, MIT