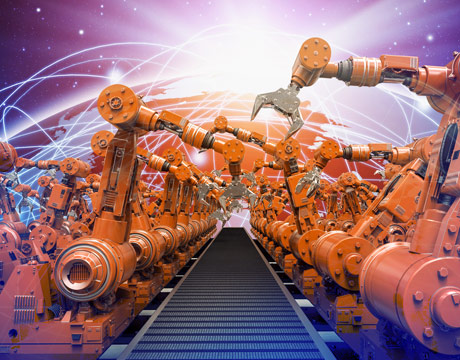 Robots teaching robots. It’s a time-tested science fiction trope, guaranteed to strike fear into the heart of anyone who ever watched The Terminator and wondered, “Is that really possible?”

Yes, it is possible. But, in reality, machine learning and cloud technologies are already being used to develop robots that are better, smarter, faster, and more useful than ever before.

And it’s happening faster than many people think.

In fact, cloud technology is proving to be the tipping point from the basic, single-purpose robotics of years past—think assembly line robots, or the machines that vacuum our floors and wash our dishes—to devices that can think, act, and work alongside humans seamlessly. Big Data, artificial intelligence, machine learning, and more are now being used to develop robots’ own neural networks, making use of today’s large data sets to train machines on behavior. In this way, programmers are now able to improve robots’ object recognition skills, their natural language processing, their image classification and more, resulting in smarter machines, all by leveraging the cloud.

What will this mean for the capabilities of robotic technology? A lot.

The experience that most people have with robotic technology today involves sitting at a desk or picking up a laptop and using that interface to tell the machine what to do. That is vastly different from how we all conduct ourselves in our day-to-day lives. We live on our smartphones, on our portable and wearable devices, and we’re using them to talk to each other, text, and more. We expect to interact with them in an almost entirely seamless way, and we expect that from all technologies as well. That kind of human interaction, rather than “program and walk away,” is the next big target for robotics engineers.

2 Robots Will Get Their Own App Stores

KUKA is a Chinese-owned German manufacturer of industrial robots that builds intelligent machines for some of the world’s largest manufacturers. For example, every Tesla automobile in the world is built on assembly lines powered by KUKA robots. To go back to the analogy of the smartphone, KUKA has created what is essentially an app store for robots, where users can browse and download all sorts of different software updates for their machines. “KUKA has all this great operational data about their robots, so they can do things like predict the need for maintenance and other operating factors about that robot,” says Elliot Yama, vice president and business leader, machine learning, with Apttus, a software company in the Bay Area whose products power the KUKA app store. “Or you might want to upgrade the software for that robot, to optimize it. You think about an app store for our phones; well, here's an app store for my industrial robot.”

3 Everything Will Be Automated

At the most basic level, any series of tasks that a person needs to do over and over again can be automated. It’s a simple matter of determining what the task is and telling the machine what needs to be done. But with machine learning, not only can robots determine the tasks that most need to be automated, they can figure out how to best do them and teach other machines what they know about completing that task. This makes scaling up tasks essentially seamless. ”Thinking about it from a purely mechanical point of view, you can think about things like IoT devices being automatically turned on and off, about printers automatically finding issues that need to get solved, and any other cases where, literally, robots are sent out to fix things out before they actually break,” says Allan Leinwand, chief technology officer with ServiceNow, a cloud computing company in Santa Clara, CA. “So you can very quickly see how this problem analysis and predictability could be really useful for the enterprise.”

Distributed software, including the Robot Operating System (ROS) powered by Ubuntu Core, is having two very direct impacts on machine development: prices are coming down and hardware is getting smaller. “There's always a kind of cost consciousness in terms of the overall building materials for machines,” says Mike Bell, executive vice president of devices and IoT at Canonical/Ubuntu, “and the reliance on a mixture of edge computing and cloud computing has accelerated that. There are applications where doing work in the cloud, combined with something running on the device, is actually the best way to do something. So, making use of the cloud in a more opportune way results in lower costs and faster hardware.” It’s a process that has happened on the desktop, on portables, on mobile and is now unfolding in robotics.

5 Robots Will Create Their Own Clouds

Developers are starting to take the popular machine learning frameworks and put them into robotic contexts, leveraging distributed software to handle vision, movement, object recognition, and more. But this is just the learning and training stage. Eventually, having all of this information on the “robot cloud” will mean that new machines will be able to tap into all the learning that has been gathered by a larger and larger group of devices. “Imagine a whole series of robots and taking all the skills and tasks and specialties that each of them has and pushing all that information back to the cloud,” says Canonical’s Bell. At that point, robots will be able to effectively teach other robots what they know and improve every machine that is connected to that cloud. “So, rather than the experience and learning capability of one device, we’ll be looking at a cloud that can improve a range of devices, improving the learning algorithm over time.”

6 Big Data Will Get Smaller

There is a problem with Big Data: As machines talk to machines faster and faster, sending more and more data into the cloud, it's becoming difficult for humans to make sense of that information. Our brains just don’t work fast enough. Clearly, the amount of data coming at us every day is not slowing down, but we need a way to intelligently sort and classify it all. Robotic technology is offering a solution to this problem, leveraging AI and analytics to break down the reams of data that exist on the cloud and categorizing them based on the applications that they’re managing. Over time, as a given company’s robots are trained and train others, they will get better and better as a group at identifying the most important information available on the company’s cloud servers. As a result, the Big Data that is now becoming so overwhelming will become more manageable. “Yes, we need machines to keep up with the speed of data,” says ServiceNow’s Leinwand. “Yes, we need machines that can make predictive correlations and be able to predict where things are going to go and use machine learning to get there. But being able to trade off data that's unique to each individual enterprise is something that will prove to be highly valuable.”

Imagine a whole series of robots, and taking all the skills and tasks and specialties that each of them has and pushing all that information back to the cloud.Mike Bell, EVP of Devices and IoT, Canonical/Ubuntu