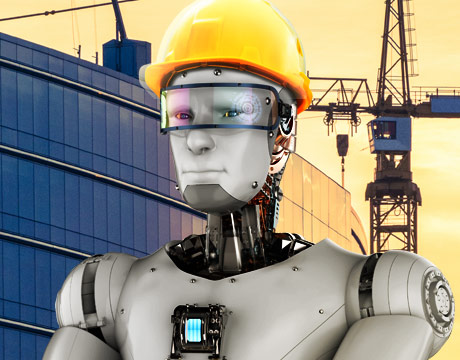 6 Paths to the Automated Construction Site

The construction site hasn’t changed much over the years. Humans in hard hats still scurry across scaffolding, lay rebar, and pour concrete. While automation has transformed the world of manufacturing, construction remains relatively untouched by self-sufficient machines. That is about to change. Artificial intelligence, 3D printing, and robotics are poised to bring automation to building construction. Here we examine six technologies likely to be found on the construction site of tomorrow.

ETH Zurich’s in situ Fabricator will soon be laying down bar for Dübendorf’s NEST (Next Evolution in Sustainable Building Technologies). The building is meant to be a primarily digitally produced structure. To that end, the Fabricator, a robotic arm on caterpillar tracks, will be constructing a double layer of metal bars. This mesh framework will subsequently be filled with concrete. The free roaming robot, using the Mesh Mold technology, as they call it, can create a framework that bends and waves, allowing NEST architects to design non rectilinear walls.

Not all walls are concrete, of course. The traditional brick wall is built brick by brick, each one put in place by human hands. But a typical bricklayer can only place something like 500 in a day. Construction Robotics’ Semi-Automated Mason, or SAM, can put down 6,000 perday, with mortar. SAM won’t eliminate all human workers, though. They’re still needed to tidy up the mortar and load SAM. But the heavy lifting will be done by the machine, saving a few backs and a few bucks as it raises brick walls faster than ever.

3D printing has been building walls a layer at a time for a few years now. In some cases, like the structures from China’s WinSun, those walls are built in sections and trucked to a site where they are assembled. Other systems do their printing on site. Copenhagen’s BOD building (for Building On Demand) will be made this year with a gantry printer capable of putting down layers of concrete 50 to 70 millimeters thick at 2.5 meters perminute. The concrete it will use is mostly made from sand and recycled tiles. One of the pioneering companies for 3D printing in construction, Contour Crafting, will also have a system for sale to construction companies later this year.

3D printed buildings are limited by the gantry—or the robotic arm—that prints them. Not only are they constrained by the physical size of a printer, a large site can’t really use more than one at a time, as they get in each other’s way. So instead of one giant autonomous builder, why not use hundreds, or thousands, of tiny ones? A swarm of robots could be capable of working together on a building of unlimited size, without colliding. Harvard researchers have created brick-laying termite bots, for instance. But the most untethered of robots is the drone. Researchers at ETH Zurich managed to use a few quadcopters, working in harmony, to build a rope bridge. If we can solve the small issue of power, drones could bring any material to any point in space for any kind of building.

No 3D printer, drone, or robotic arm will be of much use without quality software. For robots to successfully take over the construction site, they’ll need good intelligence, of the artificial kind. With AI, constructor bots will know where they and each other are at all times. They’ll also learn as they go. Deep learning is already being put to use on human dominated construction sites. The folks at Smartvid.io have used the millions of photos and videos taken of construction sites to teach their program what unsafe conditions looks like. Anyone on a construction site can take a picture of a portion of that site and have Smartvid.ioidentify potentially unsafe areas. Similar technology could one day guide robots to fix errors they’ve made, or at least to flag a human when they see something dangerous.

MIT’s Media Lab has used an existing industrial robotic arm to create the Digital Construction Platform. Untethered by a gantry, it has the ability to travel anywhere at a given site, constructing as it goes. This year the researchers used the DCP to create a 12-foot high, 50-foot diameter dome out of foam insulation. The process took only fourteenhours. The foam of that structure, or of any similarly constructed building, could easily be fitted with rebar and filled with concrete.

“Unlike direct extrusion of concrete, with print and placeyou are not changing how the structural elements of the wall are assembled,” says Julian Leland, a mechanical engineer who worked on the project. “You could 3D print a formwork that looks exactly like conventional insulated concrete formwork. As long as the rebar structure and the concrete mix, and the way you poured it and treated it after, as long as that meets building code, we have reason to believe that the structure would meet building codes, at least in the US.”

Though some of this technology has a long way to go before it becomes a reality, much of it is practically ready to go. The primary reason we don’t see robots erecting buildings is the industry’s resistance to change.

“The construction industry has a well-developed model of how to build buildings, how much those buildings are going to cost, what labor is required, et cetera” Leland says. “They don’t want to tinker with that.”

To get their technology working on actual buildings, it might be better for researchers to approach architects, who are more eager to turn to the cutting edge. But however we get there, it’s undeniable that there is a time coming when buildings will practically raise themselves.