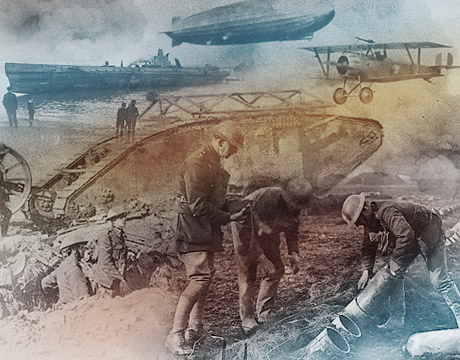 5 Winning Weapons of World War I

It began as the Great War. It was pitched to the U.S. public as the War to End All Wars. World War I failed to live up to that billing, but the planet’s first global conflict succeeded as a catalyst for some enduring technologies. The bloody intransigence of trench warfare drove both sides to develop mechanized weaponry to gain ground. World War I also brought the concept of total war into shocking reality across Europe through air raids, torpedo strikes, and gas attacks that ravaged soldiers and civilians alike. This devastation was wrought by early 20th century mechanical and chemical technologies that, a century later, are still evolving for (mostly) peaceful applications.

On May 7, 1915, a torpedo fired from a German U-boat sunk the British passenger liner HMS Lusitania off the southern Irish coast. The attack flouted international law and claimed nearly 1,200 lives including scores of Americans, precipitating the United States’ reluctant entry into the war two years later.

The idea of an underwater warship is ancient. The first modern ironclad submersibles, however, appeared during the U.S. Civil War, as typified by John Ericsson’s revolutionary U.S.S. Monitor. With the availability of wireless transmitters, periscopes, and internal combustion engines in the early 20th century, submarines had come into their own by World War I. The Imperial German Navy’s double-hulled, diesel-powered U-19 series submarine debuted just in time for the war. Twice as large as its predecessors, this twin-torpedo craft was a jewel of Germany’s 20-vessel submarine fleet. Although the British Navy possessed nearly four times as many submarines at the start of the war, Germany’s controversial strikes against merchant ships in open seas significantly disrupted Allied supply lines.

One of the more innovative modern-day submarines is a supersonic passenger sub proposed by engineers at China’s Harbin Institute of Technology. The idea of traveling underwater at the speed of sound made headlines in 2014 when the team reported recent breakthroughs in the field of supercavitation. Developed by Soviet scientists decades ago to accelerate torpedoes, supercavitation technology surrounds underwater projectiles in an air bubble to minimize surface friction. The Chinese engineers propose adding a liquid-membrane technology to further reduce friction on a submarine and increase its theoretical speed past the 3,603-mph sound barrier. In theory, they said, a supersonic submarine could cross the Pacific Ocean between Shanghai and San Francisco in just two hours.

Armored fighting vehicles were in use before the first tanks rolled into battle in 1916. However, they had conventional wheels and were limited to conventional terrain. The battlefield trenches of Western Europe demanded an unconventional approach. Borrowing from the agricultural equipment industry, the British adapted a Holt caterpillar tractor for gun-hauling vehicles and, ultimately, early tanks. The first successful use of tanks was at Cambrai in 1917, when Allies smashed 10,000 yards past the trenches of surprised German troops that had been expecting a customary pre-assault artillery barrage.

“Tractor-crawler” vehicles date to the early 1900s. Alvin Orlando Lombard, regarded as the first commercial manufacturer of continuous-track equipment, patented and subsequently built the Lombard Steam Log Hauler in 1901. Switching to internal combustion engines in 1917, Lombard licensed his ideas to Holt Manufacturing, which trademarked the term by which the company is known today – Caterpillar. The U.S. sent large numbers of these machines to European farmers, but many were diverted to military use. British officials noted their facility for navigating rugged turf and were inspired to integrate their novel crawling capabilities into armored, weaponized war machines.

Today, tanks remain a mainstay of fighting forces around the world. On the home front, continuous-track technology continues to evolve. Low-ground pressure (LGP) tracked vehicles were developed to operate in extreme ice and snow conditions, helping to construct the first airstrips and bases in the Antarctic. Modern vehicles such as Prinoth’s Panther series feature undercarriages that adapt to uneven terrain to maintain constant contact with the ground. Such vehicles are currently used for oil and gas production in environmentally sensitive areas, where 2.19 psi ground pressure helps operators access difficult areas without excessive soil compaction.

The flamethrower is another ancient idea warmed over for action in World War I. People have been aiming flames at one another at least since the fifth century B.C.E., when sulfur and coal were ignited and shot through long tubes blow-gun style to rain down on one’s adversaries. In the Great War, both sides were tinkering with the idea of a mechanized flamethrower well before hostilities broke out. Early on, large weapons with ranges of up to 90 yards were used by the British to clear trenches, yet were soon abandoned for lack of versatility in other situations. Smaller handheld and tank-mounted flamethrowers found a wider range of applications.

Fast-forward 100 years and we have the XM42 – the first personal, handheld flamethrower on the market. Billed by its maker, The Ion Productions Team (Detroit, MI), as a “grab-and-go” device, the XM42 uses a proprietary high-pressure electric pump and a 3S 12.6 volt lithium-polymer battery such as those used with radio-controlled aircraft. As a result, it doesn’t require an external pressurized fuel tank, making it convenient for consumers who, for whatever reason, need to discharge a 25-ft stream of flaming gasoline for up to 38 seconds. The manufacturer suggests practical uses such as controlling weeds, clearing snow, starting bonfires, or simply entertaining guests.

Encouraged by the effectiveness of its earlier chlorine and phosgene gas attacks, Germany developed an enhanced chemical weapon – mustard gas – in 1916. Although gas warfare was prohibited under international conventions, both sides of the conflict readily embraced it as a way through the stalemate of trench warfare, and mustard gas became one of the signature innovations of the war. Unlike other lethal inhalants, mustard gas is engineered to penetrate the skin – even through conventional clothing – so gas masks alone were not enough to protect troops from an attack. Victims suffered severe chemical burns that began with an overpowering itching sensation progressing to debilitating, often disfiguring, blisters. High exposures were often lethal, but many soldiers exposed to the gas would recover – only to experience significant health problems such as respiratory disease, blindness, or cancer in later life.

Ironically, it was the search for new cancer treatments in the war’s aftermath that revealed a powerful new peacetime use for chemicals in the mustard gas family. Researchers studying the physiological effects of the compound after the war observed its ability to suppress the formation of certain cellular components of blood. Later, an autopsy of 75 World War I veterans exposed to mustard gas revealed an unusually low level of white blood cells. In classified research during World War II, U.S. government scientists experimented with the use of nitrogen mustard to treat patients with blood cancers such as leukemia. When declassified after the war, their results paved the way for the first chemotherapy treatment, mustine – a direct descendant of this notorious chemical weapon.

Before the daring World War I flying aces like Eddie Rickenbacker or Germany’s infamous Red Baron made their mark in fixed-wing fighter planes, the skies over wartime Europe were ruled by the lumbering but effective dirigible airship. Blimps had several advantages over airplanes of the day – they could fly farther and higher, beyond the range of enemy artillery. They could carry more cargo and could keep silent watch for submarine activity. German zeppelins were used in the first strategic aerial bombing raids of civilian targets on the British mainland, heralding the dawn of “total war.”

The airship’s reign would not survive the dramatic advances in aerospace technologies that would unfold over the next few decades. However, Lockheed Martin sees important niches emerging for a new generation of hybrid airships. After 20 years of R&D on its P-791 prototype Hybrid Airship, the company has teamed up with Hybrid Enterprises to sell the ship worldwide. The ship is designed to transport up to 20 tons of cargo and 19 passengers into remote locations with no infrastructure, suiting it for uses such as Arctic oil and gas production or disaster relief.

World War I drove dramatic innovations in weapons such as the machine gun, the hand grenade, and the fighter plane. But it also accelerated advances in prosthetics, wound care, medical x-rays, and other life-saving technologies. The war also created new opportunities for women in the industrial and scientific workforce. The technological and societal issues that transformed Europe a century ago are still transforming the landscape of engineering today.

For Further Discussion
The planet’s first global conflict was a catalyst for some enduring technologies.