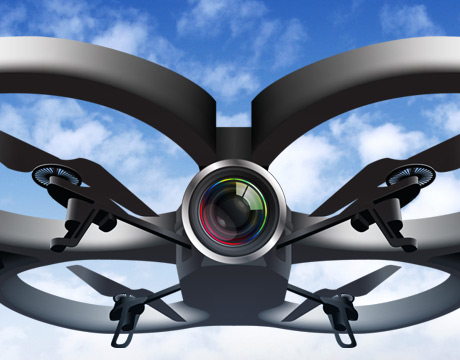 Look, up in the sky! It’s neither a bird nor a plane, it’s a drone and it’s heading rapidly your way. Unmanned aerial vehicles (UAVs) and their Earth-bound driverless counterparts are fast becoming ubiquitous as the technology gets smarter, safer, and less expensive.

Early-adopting technology geeks are not the only driver of the global UAV market’s rapid growth. According to research firm MarketsandMarkets, annual sales will soar by 32% over the next five years to $5.59 billion by 2020. Novel, high-end applications for drones and other driverless vehicles in law enforcement, the military, precision agriculture, and retail are flourishing in addition to an enthusiastic base of mainstream consumers eager for drones to do their bidding.

As drone technology advances, engineers are pushing its boundaries to explore unconventional, even slightly weird, applications for drones. Below are five examples from the extreme edge of the drone zone.

Pies in the Sky

When you’re expected to deliver a million pizzas a day in 30 minutes or less, you’re always on the lookout for more efficient ways to do it. Domino’s, the nation’s largest dough-thrower, has been testing high-tech delivery systems for years, including driverless technologies that so far have delivered more publicity than pizza. But the global chain’s investment in automation is part of a long-term strategy for growth within the tight profit margins of the fast food industry. The chain’s United Kingdom operation has explored several creative approaches to delivery automation – often taking playful license with the Domino’s brand. The remote-controlled DomiCopter, for example, buzzes above congested city streets with a payload of thermally insulated pizzas dangling from a clawlike apparatus underneath. The British division has also rolled out a self-driving two-wheeler it calls the Domi-No-Driver as a delivery option for customers ordering through the company’s website or mobile app. The LIDAR-guided cycle is equipped with an on-board warming oven which, according to Phil Zorra, director of the firm’s Redevelopment and New Knolwedge unit, can carry four times as many pizzas as the chain’s comparable people-powered vehicles. One of the company’s latest delivery automation projects, the Domino’s Robotic Unit (DRU), was developed in Australia in collaboration with Marathon Robotics, a maker of autonomous robotic targets for the defense industry. The 450-lb test vehicle reportedly tops out at about 12 miles per hour and has been approved for limited use on certain pathways and roads in the targeted test area.

Engineers at South Korea’s Korea Advanced Institute of Science and Technology have endowed their newest search and rescue drone with a suite of super powers on par with any found in the mighty Marvel Universe. Designed to aid firefighters responding to emergencies in high-rise buildings, the versatile robot flies, sticks to walls, sees in the dark, and is impervious to fire. Codenamed FAROS (Fireproof Aerial Robot System), it’s a quadcopter with a 2-D laser scanner, altimeter, and Inertia Measurement Unit that allows it to land on, cling to, and crawl on the vertical surface of walls. A thermal imaging camera and image processing software on board equips FAROS to find people in need of rescue, locate the origin of the fire, inspect the building for structural damage, and send real-time data to firefighters below. The primary improvement over the team’s previous wall-climbing drone is heightened resistance to fire, heat, and smoke. Researchers said the body is clad in a layer of aramid fibers, which fends off the effects of flames and protects sensitive internal mechanical and electronic components in a buffer of thermoelectrically cooled air.

In a breakthrough pitting one of the newest forms of mechanized combat against one of the oldest, a Russian arms maker recently unveiled a new arsenal of UAV-mounted anti-tank weaponry. At this year’s Russian Armed Forces Robotics conference, state-owned United Instrument Manufacturing Corporation (UIMC) introduced a multicopter UAV bedecked with cameras and a shoulder-launched rocket system of the caliber used against armored vehicles. UAV-launched rockets have many potential advantages over human-fired weapons – they can get closer to a target and attack it from any direction. The announcement captured the attention of defense industry observers, who analyzed a brief Ministry of Defense video for clues to the system’s capabilities. According to industry publication IHS Jane’s the drone is likely fitted with an RPG-26 Aglen anti-tank weapon, which in conventional use fires 72.5 mm rockets that can pierce 400-mm-thick armor from a distance of 250 m. The airborne bazooka is part of a new multicopter attack system for synchronized battlefield surveillance, artillery spotting, reconnaissance, cargo delivery, and assault.

Few icons of advertising have reached the heights of the venerable Goodyear Blimp. As the go-to source for aerial broadcasting, the blimp silently touts the tire brand during America’s most-watched sporting events. Can drone technology be adapted to harness that same crowd-friendly star power and bring it within closer proximity to consumers? That’s what aerospace start-up Aerotain hopes to learn from Skye, a novel UAV that integrates quadcopter-like maneuverability into an energy efficient structure that brings the blimp concept down to human eye level. Conventional UAVs with exposed rotating blades create a safety hazard in the event of an unexpected loss of altitude over a crowd. Skye, however, is a helium-filled sphere 10 ft in diameter – not exactly dainty but soft and benign enough to pose no threat to spectators below should its electronics systems fail, developers said. The blimp can be configured to haul heavy objects like cameras about a sporting event, or be customized to carry advertising messages. The control and navigation system can be programmed to spin, roll, or pull off other aerial stunts requiring a full range of motion.

Beyond doubt, the farthest-out drone concept yet is inspired by the mind of Stephen Hawking, the celebrity cosmologist, who says it’s time for Earthlings to reach for the stars in the search for alien life. The star in question is Alpha Centauri – our nearest neighboring star system – and Hawking’s interstellar transit plan calls for a light-propelled nanoprobe that flies 1,000 faster than today’s rockets. Dubbed Breakthrough Starshot, it’s part of the privately funded Breakthrough Initiatives program established by Russian Internet investor Yuri Milner to accelerate the exploration of the known universe. He hopes to focus the planet’s sharpest minds and deepest pockets on the effort, with guidance from Hawking and Facebook CEO Mark Zuckerberg. Ultimately reaching the star system could take tens of billions of dollars and multiple generations, but Milner said the initial $100 million phase could would probably trigger the development of a feasible craft launched during his lifetime. With today’s technology, the 25 trillion-mile trip to Alpha Centauri would take 30,000 years. The initiative seeks to reduce the one-way trip to about 20 years. To get there, the team has proposed to design a full array of space probe equipment that fits on a gram-scale wafer about the size of a postage stamp. This so-called StarChip would soar on a set of sails made of an ultra-lightweight metamaterial merely a few hundred atoms thick. A kilowatt-scale light beaming system based at high altitude on the Earth’s surface would focus lasers on the light-sensitive sails to push the craft rapidly to its optimum speed. Ultimately the team would like to deploy a fleet of several thousand nanocraft to capture images and data – and quite possibly confirming the existence of Earth-like planets that could harbor intelligent life. "Earth is a wonderful place, but it might not last forever,"Hawking said. “Sooner or later, we must look to the stars.”

For Further Discussion
As drone technology advances, engineers are pushing its boundaries to explore unconventional, even slightly weird, applications for drones.