The 5 Most Technologically Advanced Robots (For Their Time)

The 5 Most Technologically Advanced Robots (For Their Time) 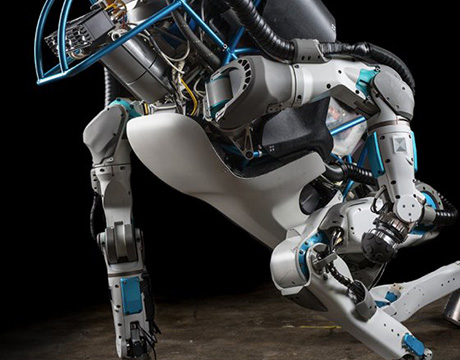 While some of history’s most famous robot names have lived only in the fictional universe, the real world has had more than its share of amazing technological breakthroughs with robots that have dramatically changed the way roboticists work.

Heni Ben Amor, assistant professor at Arizona State University, where he leads the ASU Interactive Robotics Laboratory, sayssome of the most important robots contributing the greatest advancements to the robotics field may not have the big-name recognition of their fictional cousins. But, he adds, they have been instrumental in moving the industry forward.

First on his list in date order is Shakey, the first mobile robot with the ability to perceive its surroundings and to reason. In other words, to make decisions by thinking logically, taking into consideration its perceptions. Developed by SRI (formerly Stanford Research Institute) starting in the 1960s, Shakey could perform tasks that required planning, route-finding, and the rearranging of simple objects, according to sri.com.

“Shakey already had all of the components that modern robots have,” says Ben Amor, “computer vision, reasoning, obstacle avoidance, and it did all that using what you could say was primitive computing technology. We didn’t have the knowledge that we have today; yet Shakey was way ahead of its time.”

Robots from Daimler-Benz’s Prometheus (PROgraMme for a European Traffic of Highest Efficiency and Unprecedented Safety) Project of the 1980s and 1990s is Ben Amor’s number two pick. These involved driverless cars speeding up and down Germany’s Autobahn. The program expanded and evolved as a pan-European project when other car makers, institutes, and component suppliers joined in.

However, after great initial enthusiasm and heavy investment, interest waned because investors didn’t think the public was ready, says Ben Amor. Some of the high-tech features such as computer vision components and cruise control systems were installed in Mercedes-Benz autos and high-end models of other car brands.

All remained quiet until the current interest in autonomous vehicles was re-ignited in the early 2000s when DARPA started a Grand Challenge Series of annual competitions for driverless cars offering prize money to facilitate robotic development.

Meet Repliee Q2, part of the Repliee family, which introduced the first robot with a strong visual human-likeness. Developed by Osaka University and manufactured by Kokoro Co., she made her debut at the 2005 World Expo in Japan, where she gestured, blinked, spoke, and even appeared to breathe. “For first couple of seconds, you would think it’s a human being,” says Ben Amor.

“What’s special is it made us think more about human-robotic interaction,” he notes. “As the appearance of robots gets better and better and as they have more personality, our response to them and our feelings can change. As they become more functional, that’s great, but there is a moment, a ‘valley’ or transition point, when there is something eerie about it,” and people start to feel uncomfortable.

Japanese roboticist Mashiro Mori put forth the idea decades ago that as robots became more human-like but not exactly identical, that humans become uneasy and often have negative reactions. He called this transition from admiration to apprehension the “uncanny valley.” Ben Amor says the lesson learned is that scientists should avoid the “uncanny valley” by using more robotic designs or if the designer is confident to make it look as humanlike as possible. “Anything in between you should avoid,” he says.

Next is Justin, developed by the German Aerospace Center’s Institute of Robotics and Mechatronics and introduced in 2009. The primary goal involved manipulation tasks, everything from being a household helper making coffee to repairing satellites in orbit.

Its greatest contribution to robotics was the ability to perceive humans in its environment using cameras or sensors, says Ben Amor. “Identifying someone as a human and tracking his movements has been a challenging problem.” Prior to solving that, there were safety issues when humans and robots were occupying the same space.

“Until then, we would always have to have some distance or barrier,” he explains. With Justin, “If the sensor measures something abnormal or that shouldn’t happen, an alarm is triggered to stop the robot or make the robot compliant” to avoid any actions dangerous to humans, he says. “This is a critical aspect about the safe adoption of robots in our environment.”

Rounding out the top 5 is Boston Dynamics’ family of robots and particularly its latest introduction earlier this year, called Handle. “Boston Dynamics is the leading company now in the development of versatile robots,” says Ben Amor.

As one of the most advanced robots ever, Handle operates on a leg-and-wheel system and can perform actions and interact with humans as never before.

“It’s interesting to see the flourishing of creativity and ideas,” says Ben Amor. With so many new tools, such as 3D printing, machine learning, and artificial intelligence, building a robot has become so much more affordable. “Those have really have pushed us far forward,” he says.

As the appearance of robots gets better and better and as they have more personality, our response to them and our feelings can change. Prof. Heni Ben Amor, Arizona State University