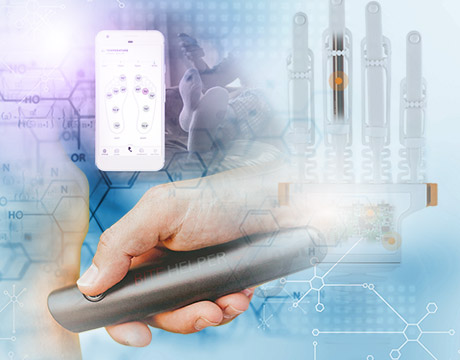 The latest technologies for personal fitness, wellness, and health monitoring were on display at the 2018 edition of the Consumer Electronics Show (CES2018), held January 9-12 in Las Vegas. Traditionally known as the launch pad for next-generation television, audio systems, gaming, and other popular gadgetry, CES devoted a healthy portion of its 2.75 million square-foot exhibit floor to products that help people prevent or manage significant health problems like stroke, cancer, and diabetes. Health and wellness tech has moved beyond the domain of wearable fitness monitors. Specialized monitors and trackers now allow users who have or are at risk of developing serious diseases to take charge of their own long-term health by measuring day-to-day trends. Here are five nominated products in the health, fitness, and biotech field that gained recognition in this year’s CES Innovation Awards showcase.

Socking It to Diabetes

The latest diabetes numbers from the U.S. Centers for Disease Control and Prevention (CDC) are sobering. More than 100 million Americans today are living with diabetes or prediabetes. Diabetes is the nation’s seventh-leading cause of death, and its prevalence continues to grow along with the obesity epidemic. Improperly treated diabetes can damage peripheral nerves and blood vessels in the body’s extremities. In the feet, this damage gives rise to ulcers that can quickly become infected and don’t heal properly – resulting too often in lower-leg amputations and an increased likelihood of premature death. For obvious reasons, physicians coach their patients with diabetes to take good care of their feet. But even with close care, once a problem has become visible to the eye it is much harder to deal with.

Also for You: Here are some of the major challenges bioengineering faces in ‘18

Siren has developed high-tech socks with embedded sensors seamlessly embedded into the company’s proprietary Neurofabric. The sensors continuously monitor temperature at the bottom of the feet. Temperature changes in the skin are a clinically tested indicator of inflammation, a telltale sign the body is fighting an infection. Six sensors are embedded into the socks at the most common sites of diabetic foot injuries. Measurement data is sent to the user’s smart phone, which sends an alert when temperature rises are detected. Users without smart phones can use a special plug-in device that receives data and forwards it to Siren’s customer service department, which calls or texts alerts into the user when temperatures rise. The socks are washable and dryable, and replacements can be ordered on a subscription basis.

Taking the Itch Out of Bug Bites

Generations of moms have warned their kids that scratching their mosquito bites would only make them itchier. That advice carries more clout today as mosquito-borne viruses of the developing world such as zika, dengue and malaria make inroads in the United States. Recent studies have found a direct connection between scratching, inflammation, and a more rapid replication of the virus in infected people. With more than 5,600 symptomatic cases of Zika virus reported in the United States to date, many people are eager for protection against it and other diseases once unheard of in this country. The Maxogen Group’s response is the Bite Helper, a device that neutralizes the itch and irritation of insect bites. The company’s proprietary Thermo-Pulse-Technology delivers heat and vibration to the bite area, which increases blood flow and circulation. The immediate consumer benefit is itch relief without chemical bug repellants or anti-itch medicines. However, by enabling bites to heal and go away on their own without further inflammation, the Bite Helper may help contain the spread of dangerous infections.

In Part 2 of “5 Innovative Medical Technologies,” we look at a device for stroke rehabilitation as well as the “Neurostylus,” to prevent neuropathy, one of the most serious side effects of diabetes.