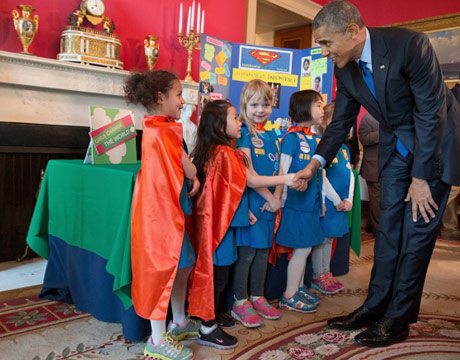 For some students, all under the age of 20, meeting the President is not a fanciful dream any longer. Not only did they meet the President, they also showcased their inventions to him at the White House Science Fair on March 23, 2015.

President Obama hosted the 5th White House Science Fair, celebrating the student winners of a broad range of science, technology, engineering, and math (STEM) competitions from across America. This year’s event focused on diversity and inclusion in STEM, with participants as young as the six-year old Girl Scout Daisies, who stole everyone’s hearts with their page-turning LEGO invention.

Sophia Nobles and Joseph Santana, two middle-school students from Florida, designed a renewable way of generating safe drinking water from ocean water and won a competition at their school. “We were researching desalination and realized how costly it is, so we came up with a way to clean water with less energy,” says Nobles, displaying WateRenew, a conceptual system that converts energy from the elliptical motion of waves into electrical energy that can power desalination of ocean water into drinking water. “With technology we can fix the problems in the world,” says 11-year old Nobles, who aims to be a mechanical engineer.

Fifteen-year old Maureen Botros of Kansas invented a wearable device that collects and stores workout data, which can be analyzed and tracked by the user. The device called Illumi-cize, which took the top prize at the Kansas Junior Academy of Science competition, uses a pulse meter to measure heart rate and sends that information to a computer chip. The chip illuminates light-up accessories based on the intensity of a person’s physical activity. Botros also developed a wristband that lights up when a person’s heart rate is elevated beyond its normal resting range.

Another wearable device at the science fair was displayed by high-school students Jonathan Hernandez and Fanta Sinayoko from Lancaster, CA, representing their high-school’s Lemelson-MIT “InvenTeam.” The team designed a blood alcohol content detection wristband aimed for adults and of-age college students who wish to drink responsibly. Upon blowing onto a miniature sensor in the low-cost wearable breathalyzer, the presence of ethanol triggers an analog voltage charge that is converted into a light-emitting diode reaction. Colors indicate blood alcohol results to the wearer; green indicates the user is safe to drive, and red indicates the user is not safe to drive.

A research project presented by 19-year old Natalie Ng, a freshman at Stanford University, could have implications for breast cancer diagnosis. “The problem today is a lot of people are taking chemotherapy to prevent the spread of cancer and metastasis. My project was to tell the doctor which patients will most likely to develop metastasis, and therefore, would be good candidates for chemotherapy,” says Ng. She developed two micro-RNA-based prognostic models that can predict metastasis in breast cancer, which garnered her the first place at the 2013 International BioGENEius Challenge.

Tufts University’s bioengineering student Harry Paul, who was born with congenital scoliosis, endured more than a dozen spinal surgeries to help correct the problem. Now the 17-year old freshman is working to help other young patients avoid the burdensome operations with a 3D printed spinal implant that expands with age, extending the time between surgeries. The mechanical model of the spinal column that he designed using computers and 3D printers, earned him a place as a semifinalist at the 2014 Intel International Science and Engineering Fair.

Obama also highlighted that “Science is for all of us” and the classrooms, labs, workplaces, and media should reflect that. “We get the most out of all our nation’s talent – and that means reaching out to boys and girls, men and women of all races and all backgrounds,” he said.

For Further Discussion
We get the most out of all our nation’s talent – and that means reaching out to boys and girls, men and women of all races and all backgrounds.President Obama