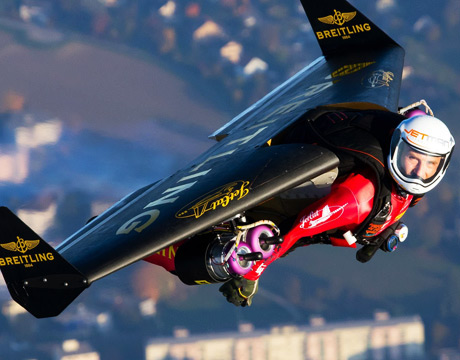 Innovation-wise, the Experimental Aircraft Association’s AirVenture 2013 (The Oshkosh Airshow, Oshkosh, WI) was a little bit glitzy and a little bit green. The squadron of future-forward flying machines descending on the self-proclaimed “World’s Greatest Aviation Celebration” July 29-August 4 represented the general aviation industry’s dual embrace of sensationalism and sustainability as the wind beneath its wings.

Planes powered by alternative fuels, a plane you can park in your garage, and a virtually plane-less flying daredevil billed as Jetman were all on display for a mostly plain-clothes crowd of 500,000. The traditional presence of active military planes and flyers was missing this year due to sequestration, but that only freed up more air time for the industry to showcase its flight pattern for the future.

Anticipating worrisome trends in the future of general aviation as fewer civilians invest in the time and expense of flight school and licensure, many of the 821 vendors at Oshkosh rolled out innovations that would address the industry’s reliance on dirty, expensive fuels and rekindle the public’s fascination with flying as a lifestyle. Here are five of the highest-flying technical attractions at this year’s show.

Get the Lead Out

Long forbidden in the automotive world, lead-containing gasoline is still used to fuel small airplanes such as those used in pilot training. Along with its cloudy emissions ratings, today’s sky-high energy prices have pushed up the cost of the common aviation gas known as 100 low-lead (100LL) to about $6 per gallon. According to Aviat Aircraft, Inc. (Afton, WY), that’s pushing flight school tuition ever higher and that’s having a downstream effect on the future pipeline of licensed pilots. At Oshkosh, Aviat launched a new proof-of-concept plane that could be a natural solution. A modified version of Aviat’s industry-standard Husky A-1C single-engine taildragger debuted as the industry’s first piston-powered dual-fuel plane that burns either 100LL or compressed natural gas (CNG). CNG has significantly higher octane levels than 100LL, produces 90% less smog particles, and cuts carbon dioxide emissions by a third. Because the CNG engine runs cooler, oil stays cleaner longer and helps extend engine life. With only slight modifications to its standard design, the Husky lets a pilot switch between 100LL and CNG tanks, allowing the pilot to select the most efficient mode for the situation at hand. The belly-mounted CNG tank and other fuel system components add about 135 pounds to the Husky’s overall weight, but that is expected to drop rapidly as the natural gas industry perfects new, lightweight composite tanks. Aviat developed the technology in collaboration with the Aviation Foundation of America, which says it could help flight schools reduce their fuel costs by 80%.

Although not an aviation innovation per se, Oshkosh organizers have rigged up a creative evening entertainment option for visiting private pilots who aren’t quite ready to leave the cockpit at the end of the day. The festival’s Fly-In Theater reimagines the classic American drive-in movie format for the winged world. Action and aircraft-themed movies flash across its five-story outdoor screen before rows and rows of small planes and popcorn-munching pilots. This year, attendees got an early peak at Disney’s “Planes.”

One of the biggest hits of Oshkosh was the debut of Terrafugia’s Transition, a small airplane that doubles as a street-legal automobile. The company says it can switch between flying and driving modes in less than a minute and, despite a 26.6-ft. wingspan, can fit in a one-car garage thanks to electromechanically folding wings. The Transition has the distinctions of being the only light aircraft designed to meet federal Motor Vehicle Safety Standards and the only car equipped with a full-vehicle parachute. It tops out a 100 mph in the air with a range of about 400 miles. On the highway, the Transition manages decent fuel economy with 35 miles per gallon. Although stratospherically priced at $279,000, Terrafugia believes it will find a niche with practical benefits eliminating the need for ground transportation to and from an airport. Safety is another pro, as pilots faced with bad weather have the option of landing and driving to their destination.

Nothing represents the pinnacle of practical, individual human flight more than a jet pack. The elusive technology for controlled open-air flight may still be in the distance, but don’t tell Jetman. He’s been jumping out of helicopters for the past five years, using a four-engine carbon-Kevlar jetwing to power a 150-mph controlled fall to Earth. Jetman’s secret identity is French pilot Yves Rossy, who doubles as the human fuselage of this jet-pack-esque technology. Using body movements to maneuver and a handheld throttle to control thrust, Rossy has performed numerous high-profile stunts for his corporate sponsor Breitling luxury watches.

On another front in the battle to lower the cost and expand the possibilities of private flight, the Quicksilver EMG electric motor glider is taking shape as a more versatile addition to the ultralight class. The team from Tangent Aircraft (Corning, CA) previewed its prototype for an aircraft for the masses – a safe single-seat $10,000 flyer that owners can upgrade to carry a passenger as their skills increase. The lowest-cost version would be sold as a kit that conforms to federal aviation requirements that amateur aircraft be assembled mostly by the owner. As an ultralight, the single-seat configuration is not subject to FAA flight regulations, enabling new flyers to get their wings on their own terms. If and when they decide they would like to haul a passenger, they can re-register the craft as an experimental light aircraft and add a second seat for passengers. The company views that as a solution to the high cost of pilot training. “The electric training paradigm is actually a perfect market for electric aircraft,” says Tangent CEO Brian Carpenter, citing the suitability for battery power for missions of about an hour such as the typical flight lesson. He says the initial versions are adapting technologies for motors, controllers, propellers, telemetry, and control systems from off-the-shelf products for radio-controlled model planes to minimize R&D costs.