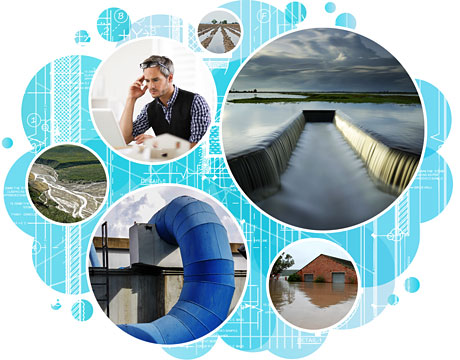 Arturo Leon, assistant professor in the school of civil engineering and construction engineering at Oregon State University, says hydraulic engineering continues to evolve but the past is often not far behind. “Some of the developments are recent but we’re still using work that goes back a hundred years and just improving on some of it,” he says.

“That’s part of what’s so fascinating,” says Leon, adding, “If you have a fear of water, this wouldn’t likely be for you. However, if you’re excited by what covers roughly 70% of the planet — and is both one of our greatest assets and one of the most potentially deadly elements — then hydraulics engineering may be perfect for you.”

Below are four leading job areas in this field to consider.

This can potentially cover most aspects of hydraulics engineering. If numbers and modeling are your game, then employment opportunities abound. For example, if you’re an animal lover, your models for fish passage might just save some bluegill while allowing industry to operate. As a side note, it can also prevent fatalities to another species called humans, as it’s been highly utilized to predict water disasters.

Creations such as canals are key to transport flow and their origin goes all the way back to the days of the pharaohs. “They improve the protection of the river and are perfect to protect the sides of the rivers...You’re looking at open channel which means that it is open to the air,” Leon says. Pipe flows also fit into this area, including dealing with sewage issues — maybe not the most glamorous area for hydraulics engineers but highly important.

Utilizing numerical modeling, designs are incorporated not just for immediate solution but anticipation of problems down the road. And stormwater is not a problem to be underestimated. According to the U.S. Environmental Protection Agency’s website, it can cause everything from stream bank erosion, to increased turbidity, to contamination of multiple bodies of water. An example of a hydraulic solution they give is grass-covered hydraulic conveyance channels. “It has many opportunities because any local area can find themselves having this issue, and the negative impact can be ongoing,” Leon says.

When considering water issues, sediment can be an afterthought. Yet, if it is found in excess, it can create measurable erosion problems. It can also even induce the movement of boulders, which brings its own possible dangers. Analysis allows a view of what is affecting the balance and what solutions can apply. For example, for the city of Austin, well known for its beautiful lake views, they work with the steady state methods of incipient motion and sediment continuity, while the dynamic methods employed are sediment continuity and sediment routing (according to www.austintexas.gov).

For Further Discussion
Some of the developments are recent but we’re still using work that goes back a hundred years and just improving on some of it.Prof. Arturo Leon, Oregon State University