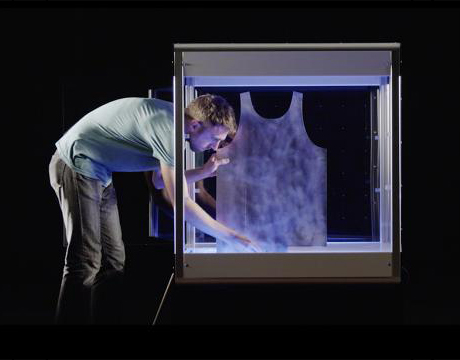 At long last, the cut of your clothes need no longer depend upon the whims of a designer, the average consumer body type, or even—for those who can afford it—the skill of a tailor. The Electroloom will soon bring the 3D printing of garments to the hands, and imaginations, of garment wearers of all shapes and sizes.

The name of this new printer is something of a misnomer. For there is no loom in the Electroloom—no weaving of any kind, actually. Instead, incredibly fine fibers are spun out of a nozzle and matted together, much as wood fibers mesh to make paper. The technology comes to textiles through the world of bioengineering: The founders of the company, two mechanical engineers and a computer engineer, worked together making artificial blood vessels as grad students at the California Polytechnic State University at San Luis Obispo. They created these fibers by applying a high voltage to droplets at the tips of tiny nozzles, a process called electrospinning.

As they earned their degrees, they discussed the possibility of using the same technique to make fabrics. The brainstorming continued post graduation and eventually the trio to quit their jobs to develop the Electroloom full time.

The chief difference between making costumes and making capillaries, they soon found, is the need for speed. The setup they’d been using in school had a single nozzle and produced threads at a painfully slow rate. “We added more nozzles so we could produce fibers faster, we changed the solution chemistry so we could pump the stuff out faster, and we’ve just now started to experiment with different nozzle shapes to pump faster,” says Marcus Foley, one of the co-founders. “But it’s still a slow process.” The first tank top they produced took about 14 hours to emerge. Since then they’ve added a second pump, cutting print time roughly in half. “Our ideal goal would be to get it down to two hours this year.”

The fact that the tank top, and any future tank tops, will be produced by a machine that falls in the category of 3D printing, doesn’t mean they must be made of synthetic materials. The textiles are not the spawn of a spool of ABS filament. Right now, the fabrics spun on the Electroloom are a mix of polyester and cotton, but the team has recently hired a materials scientist to expand the materials portfolio available to e-loom users. “There are solvents that will dissolve pretty much anything,” says Foley. “The only problem we run into is that many are too dangerous to work with.” So far, their material scientist has managed to make silk and acrylic work on the printer.

Whatever the material a user might choose, the threads spewed out of the Electroloom’s nozzles will end up formless if they don’t land on something. Which is to say, DIY clothing designers will have to first make some mannequin-like structure with some other technology. For that perfect skintight catsuit, the target body would have to be scanned and then printed on a more conventional 3D printer. The resultant mannequin would be placed into the Electrloom to receive the microns-sized fibers. “For the foreseeable future, the process requires molds to be in the machine,” says Foley. “We’ll provide molds with it, but they can be made out of anything. We hope people will experiment, cut out shapes of wood or metal.”

So far, the Electroloom has produced only a handful of garments: headbands, those tank tops, a beanie. Although they have been worn as a proof-of-concept, none of them has entered anyone’s permanent wardrobe. “It feels like a cohesive fabric, but there’s still a lot of room for improvement on the durability front,” says Foley. Though one tank top has survived repeated wearing, if it were to catch on a doorknob, that would be the end of it.

But the current fragility of the printed textiles has done little to dampen the imagination of early adopters eager to get their hands on the Electroloom. “That’s one of the coolest parts of the project,” says Foley. “Every time we tell someone about this technology we get all kinds of crazy ideas.” These include a toilet paper machine in the bathroom that would print fresh wipes with each visit, form-fitting condoms, and scrubs that could be printed in the operating room to insure sterility.

But first the Electroloom will have to produce the quotidian. “We’ve been trying to keep our focus on 3D printed garments,” says Foley. “That’s what excited us the most: the ability to download a t-shirt you like and just print it. That’s the overarching goal we are working with.”

For Further Discussion
That’s one of the coolest parts of the project. Every time we tell someone about this technology we get all kinds of crazy ideas.Marcus Foley, co-founder, Electrloom