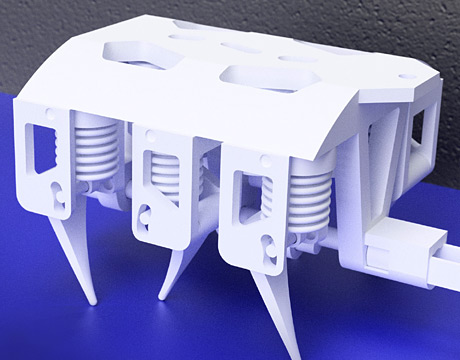 Roboticist Daniela Rus found out just how right the philosopher Plato was when he wrote, “Necessity is the mother of invention.” She was teaching in the computer science department at Dartmouth in the mid-1990s, her first faculty position after earning a Ph.D. from Cornell, and she wanted to start a robotics lab. But the university did not have the facilities to do so nor were students trained to use lathes, CNC machines, and the like.

One thing she knew, though, was that her students knew how to program. At the time, there was this new technology just becoming available, called rapid prototyping. "Why not give it a try," she thought. “Instead of machining, we could 3D print the models,” Rus says. So she spent almost her entire startup budget to invest in a 3D printer that allowed her (and her students) to take a non-traditional approach to building robots. An unrealized benefit at the time: It gave her a head start in the field.

Now, two decades later as director of MIT’s Computer Science and Artificial Intelligence Laboratory (CSAIL), she and her team have developed an approach for printing dynamic robots, a real step toward having “a robot technically walk itself out of the printer. As roboticists, we want to print an entire robotic system with the same ease as I print a paper,” says Rus, who oversees the project.

The key is a technique they developed that enables the simultaneous printing of solids and liquids. The team calls this “printable hydraulics.” Current technology allows only the printing of solid components, which means the body of the robot can be printed, but the actuation systems must be developed, assembled, and installed separately.

This new method enables the complete encapsulation of liquids that can be enclosed in the body of the robot during the printing process. “With that, we can begin to develop models that encapsulate hydraulic actuation,” Rus says. “As we move liquids from one part of the system to the other, it effectively creates movement.”

Using an off-the-shelf inkjet 3D printer modified by the team, the robot is built layer-by-layer from the bottom up by depositing individual droplets of materials 20 to 30 microns in diameter each. According to team member Robert MacCurdy, MIT postdoctoral researcher, 3D inkjet printing allows the use of eight different materials deposited adjacent to one another all at the same time. Then, high-intensity UV light solidifies all of the materials except for the liquids.

As roboticists, we want to print an entire robotic system with the same ease as I print a paper.
Daniela Rus, director, CSAIL, MIT

“The network of bellows and channels allows the liquid to move through the system,” Rus explains. “Moving this liquid through the system allows us to make different movements. We get the legs to move in a way that enables a tripod gait for the robot.”

Aside from a motor and power supply, every component was printed in a single step with no assembly required. Rus saysthe big engineering challenge was determining how to configure a 3D printer to enable the creation of such complex systems; in other words, how to design systems that use modules that can create linear and rotational motion and then compose them into an actual working system.

“The insect is a very complex system,” she says. “It’s remarkable you could build that without needing any manual assembly.”

The team began working on the project in the summer of 2015. “We tried a number of different designs and variations on the design. The first ones did not work so well,” she says. As the team continued to experiment, they came upon the one that worked, using an off-the-shelf 3D printer that they modified. They have plans down the road to create their own printer.

There are many advantages to using this technique to create robots, including flexibility in design after a template is made (to customize the robot for the task it will be used for); speed; and lower cost. Although the insect-like robot took 22 hours to print, the researchers said that wasn’t a long time considering its complexity. Accelerating the process is most dependent on improvement of the printers themselves, Rus adds.

“It’s very interesting how needs inspire innovation,” she says. “My need at [Dartmouth] was to make robots, and I had certain resources. Buying this big machine gave me a very interesting new approach.”