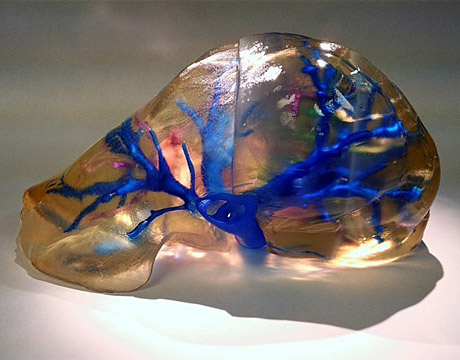 3D Printing: A New Ally for the Liver

In 2012, Dr. Nizar Zein found himself at a Starbucks reading an article on 3D printing for non-medical use. Among other things, he considered the problem with surgery involving livers, whether transplant or tumor resection. One issue for this complicated organ, he says, is that patients sometimes end up with complications due to inadvertently cutting through a major blood vessel or bile duct.

He realized 3D printing might bea helpfulassistant. Working as part of a team at the Cleveland Clinic,he and his group havebeen on an odyssey to mix this technology with the medical need.

A Closer Look, and Feel

As Zein explains, there are difficulties in coming up with a surgical plan when it comes to the liver. For example, when you turn 2D images into 3D images, you were still looking at these 3D images through a 2D computer screen. You lose the sense of depth, he says. The thinking with 3D printing a liver wasthatit would solve this issue.And it could have the added advantage of tactile functioning. With a replica of the patient’s liver, the thought was also that you could reassess your landmark and proximity to major blood vessels and bile ducts, says Zein, the Cleveland Clinic’s chief of hepatology and chairman of global patient services.

They produced the very first patient-phased liver in 2012 and, to his knowledge, it was the first 3D-printed liver ever done.

Phase II then came, itsprimary goal to verify that an identical copy could be created for a patient’s liver. “We went through a process for every patient who underwent liver surgery where we resected a portion of the liver, took it out, [and] prior to surgery, weprepared a 3D printed version of it,” explains Zein. They found the results showed it was quite accurate, he says.

Improvements vary from the first model being at 75% of an actual liver model to those today createdat actual scale, to moving to plastic as a material. Among the most impressive improvements is in speed, however. The first model took roughly six weeks to produce. Now? It takes less than 48 hours.

But there has also been a change in the transparency of the model. Zein described early ones as a “little bit hazy, yellowish in color,”while more recent models are almost like looking through glass.

They’ve also extended the technology, for surgical purposes, to components. This includes the hilum, which, Zein says, is the most complicated in terms of blood vessels and bile ducts structures. It’s printed separately from the liver so it allows for better planning, he says. They have utilized magnets to print the liver and different components separately but, with magnets, they can put them back together depending on what particular component you want to see more carefully.

They even developed methods toallow models in sterile packaging to be taken into the operating room.

The team’s data has shown times when surgical plans have been at least somewhat altered when a model was utilized. The hospital has even used a model for guidance for a surgery involving a tumor in the liver—after the patient had been turned down by multiple institutions for surgery, he says.

My career has been as a clinical investigator so medical research and investigation is part of my life and it’s probably the most exciting part of my life.
Dr. Nizar Zein, The Cleveland Clinic

“My career has been as a clinical investigator so medical research and investigation is part of my life and it’s probably the most exciting part of my life,” says Zein, whose father was an engineer. “So I’m very proud of what we did. What comes out of it, in the end, I’m not sure, but I have a feeling that there will be a role for these technologies, 3D printing, in complex surgeries.”

Bioengineering is the theme of ASME’s IMECE 2015. Learn more in Houston, TX next week.