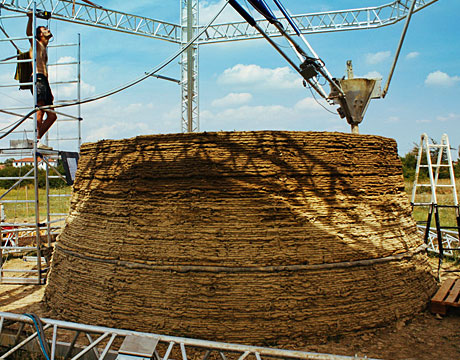 Printing a house with the BigDeltaWASP 3D printer. Image: WASP

Last year, the Italian 3D printer company WASP unveiled the world's largest 3D printer. It's a giant hexagonal tower 40 feet high and 20 feet wide. The size of the machine, which is called Big Delta, wasn't an attempt to get into the Guinness book of world records—it was more an attempt to get to utopia (WASP stands for "World's Advanced Saving Project"). The printer is made to build homes, in whatever far-flung places might need them, cheaply and of the material found there.

No one has ever printed earth and straw—with this first living module we want to prove, even to ourselves, that you can do it.
Maurizio Andreoli, WASP's spokesman

“What we are doing is an experiment [that is] somewhat ‘extreme,’” says Maurizio Andreoli, WASP's spokesman. "No one has ever printed earth and straw. With this first living module we want to prove, even to ourselves, that you can do it."

They are currently proving just that.

In a commune called Massa Lombarda, in Italy's province of Ravenna, they have begun building in their “Technological Village,” dubbed Shamballa. They now have produced a wall the height of an average-sized person.

According to WASP, its extruder turns dirt and straw that are combined with a mixer and a motorized hoe into a "fiber-reinforced material like a composite." The group claims, using its technology, "Two men can build a refuge in a week." And that refuge needn't be box-like, utilitarian, and boring. Walls can curve and undulate, homes can be free of corners, so the world's neediest may end up in the most cutting edge architecture. The shanty towns of the future may be a bit funkier than their predecessors.

Their current wall, a rising cylinder that looks as if it's been stretched on a potter's wheel, is made of two layers bolstered by wavy or zig-zagging lines inside. Beause it is hollow, it could be filled with insulation or some kind of ventilation system. But this first prototype won't be for living in. WASP plans to tear it down and use the fibrous material for building new structures.

WASP isn’t the only firm trying to print homes or homelike structures. Berkeley Khoshnevis's Contour Crafting has been laying down walls for some time. And researchers at the Netherlands Eindhoven University have been printing some groovy structures with their concrete printer. But the people behind WASP may be the most idealistic. They don't patent their inventions, and they invite anyone who wants to contribute to come help them build in Shamballa. They hope Big Delta will eventually be able to help create the 100,000 new homes a day that the UN has said will be needed throughout the world over the next 15 years.

"Once the prototype is done, we are going to start a very intense studio work on other materials, but always in the direction of sustainability--environmentally and economically," says Andreoli.