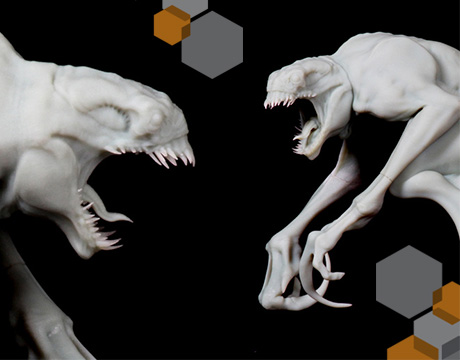 At Legacy Effects, additive manufacturing can take the talents of artists and designers and transform them into stunningly detailed creatures. Image: Lagacy Effects

The Future of Hollywood Will Be 3D-Printed

by Holly B. Martin

Jason Lopes commands the attention of every room he walks into these days.

He's been called influential, engaging and the most interesting speaker on 3D printing today—and with 3D-printing work of his featured in Hollywood films such as Iron Man, Jurassic World, and Pacific Rim, the praise is well-deserved.

Lopes is the lead systems engineer at Legacy Effects, a studio that uses additive technology, along with the talents of many artists and designers, to create stunning visuals for Hollywood and beyond.

Lopes has been making the rounds at 3D-printing conferences, and in August delivered a keynote address at ASME's AM3D conference where he spoke about how the expanding functionality of additive manufacturing (AM) is disrupting industries like his.

Despite his popularity on the 3D circuit, Lopes is the first to admit his artistic work and training—he studied film at The Art Institute of Philadelphia—have made him a bit of an oddball at AM events.

"When I started showing up to these events, people were just saying, 'Oh, that's just an artistic side,' and basically not taking it as serious as it was—'Oh, it's just Hollywood.' But the amount of engineering that goes into all of our creations is absolutely phenomenal, and I can attest to our workflow that it's not an easy thing to do what we do," Lopes says.

Along with his film work, Lopes's 3D printing has also appeared in video-game trailers for Call of Duty, Destiny, and Halo, as well as high-end commercials for Old Spice, GEICO, Direct TV, and more.

The breadth of Lopes's work—3D scanning, 3D printing, figuring out how to get ideas off of the page and into reality—means he's had to become an expert in marrying the technology of 3D printing and the skills it takes to do special effects design.

Balancing art, technology, and engineering requires patience and hard work, especially when it comes to Legacy Effects' signature armored suit, versions of which have been seen in RoboCop and Iron Man.

"Just making a suit to fit over the person that's going to be inside of it, from a conceptual standpoint, is probably one of the hardest things out there to do, because right out the gate, you're not in control of the person that they're choosing to put inside of this artwork. [If it doesn't fit] the back-and-forth that needs to happen so the art isn't sacrificed is just on a whole other level," Lopes says.

There's more than what meets the eye when it comes to creating a superhero suit like the one worn by, say, Robert Downey Jr.'sTony Stark—namely because there's more than one suit.

"Don't forget, when we do a movie, especially an action movie or a superhero movie, you have a hero suit, and then you have stunt versions. So we need to break out of that master asset and be able to come up with each specific suit for the requirement, and the shot," Lopes says.

Although Lopes and his crew try to directly manufacture pieces and skip the mold-making as often as possible to save money and time, the team typically uses 3D printing for rapid prototyping. They then add the details to create a master pattern that will eventually be cast in other materials, each with different thicknesses, flexibility, and other properties.

Some suits call for lights and other electronics, requiring the designers to incorporate batteries, processor boards, and wiring harnesses into the artwork—and all of this has to happen while remaining identical in appearance.

Legacy Effects' 3D expertise is not only coveted by filmmakers and producers, but has become a hot-ticket item in government and industry projects that have nothing to do with entertainment.

For example, a government department got in touch with Lopes and crew to collaborate on the ongoing development of its tactical assault light operator suit (TALOS), a high-tech armored, robotic suit expected to be unveiled by 2018.

At the same time, the team has formed mutually beneficial relationships with those working in other fields such as aerospace, sports, medicine, and materials research.

“Everyone wants to have a pretty shell on top of their nice engineering [to be more visually appealing], but they understand that it's more than just a design skill. They see what we're able to do in our time frames, and they love learning from us," Lopes says.

“It allows people to see things outside the box."

The future of 3D printing in any field is debatable, and Lopes definitely has some opinions on whether materials will surpass hardware in terms of importance.

"I've been saying since Day One, for me, I think it's all materials," Lopes says. "Every day you hear more and more about materials that are coming out, and what's on the horizon, and I think that just opens up more opportunities.

“Don't get me wrong—I respect the hardware, and I think the hardware is going to advance as well, but let's face it: What's going to drive future innovation is…materials-based, as far as I'm concerned."

Lopes is excited about the the newer nylons and rubber-like materials currently being used in 3D printing. But what he, and many others, would really like to see are stronger materials, particularly those that can withstand higher temperatures for right-off-the-printer usage.

“When we can take someone's vision and directly output that—put it in their hands and call it a day—that's what will be the big game-changer for us," he says.

The new frontier of additive manufacturing can be intimidating to navigate; fortunately, there's the ASME AM3D conference to help guide you as you integrate AM into your business. Learn more about theASME Additive Manufacturing and 3D Printing Conference and Expo here.

Holly B. Martin is an independent writer.