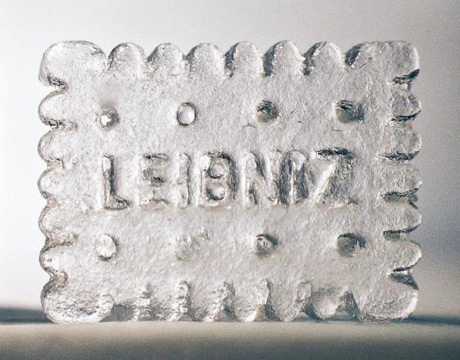 Whether it’s coupons, a midterm essay, or a flyer for a lost cat, paper and toner cover the vast majority of our 2D needs. But in the world of objects, different applications demand different materials. The plastic that feeds the majority of our 3D printers is not going help us produce a kitchen knife or a car bumper, to say nothing of a window or a camera lens.

Now researchers at the Karlsruhe Institute of Technology have created a method for printing in that later category, glass.

Anyone who has seen a glassblower at work might think that printing with glass would be fairly simple. Just melt the stuff to liquid form and build layer by layer as you would with any material. But to melt glass you need temperatures in the thousands, which means that whatever printer you tried to put it through would melt as well.

“Our idea was: ‘Why not try to make a process that gives the structure at room temperature?’” says Prof. Bastian Rapp, a polymer chemist at the institute. To keep the printing as simple as it would be with a polymer, Rapp and his colleagues kept the polymer. In essence they filled a polymer with high degrees of glass ground into a nano-powder.

“If you use classical 3D printing, to give this composite form, you have a 3D definable structure, a piece of plastic with a lot of glass particles,” says Rapp. “Then you put it in the oven and melt away the plastics.” In the oven the glass particles are sintered, requiring a much lower temperature than if they were brought to their melting point.

Thanks to the use of the polymer, it hardly matters what printer is used, and Rapp is quick to point out that they did not invent a new 3D printer. They also did not invent the idea of mixing glass particles with a polymer. But previous composites could only produce a milky white glass.

The fact that polymers tend to be hydrophobic and glass particles hydrophilic was to blame for the less-than-transparent product. So Rapp needed to either make a more hydrophilic polymer or a more hydrophobic glass particle. The latter was the simpler challenge. “It’s basically like pouring sugar into a hot glass of water or milk. If the milk is sufficiently hot, you can dissolve a lot of sugar, but if the milk is cold it’s very hard—a substantial amount of sugar will fall to the bottom.”

Rapp’s glass is as clear and pure as that produced by any other industry. So the applications run to the infinite. “The first thing you think of is optics,” says Rapp. All kinds of gadgets will soon be able to have high-grade lenses. Glass lenses tend to be more expensive than their plastic brethren thanks to the fact that they have to be ground by hand. That will no longer be the case. And they could even be printed with bulletproof glass.

Architects are sure to love the new method. The windows in most buildings are flat, not because of some stylistic fashion, but because of the cost of producing and shipping curves. Now wavy, curvy glass will be able to be made on site for minimal cost. Corners will become obsolete. Cars could have panoramic tops. And the vases created by our sculptors can be more wondrous and accessible than ever before.

“You will have high-quality, scratch-resistant, maybe even bulletproof glass to protect against breakage,” says Rapp. “All these things have not been addressed in the past. It was just not feasible.”

For Further Discussion
You will have high-quality, scratch-resistant, maybe even bulletproof glass to protect against breakage. All these things have not been addressed in the past. It was just not feasible.Prof. Bastian Rapp, Karlsruhe Institute of Technology