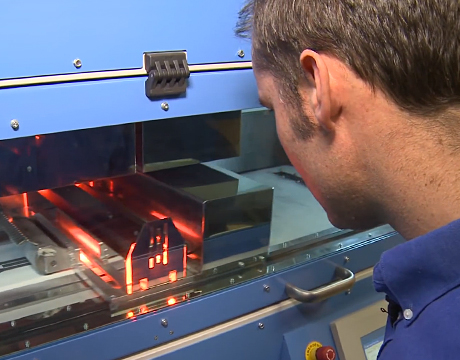 Despite the fact that it can be used to make pretty much anything, 3D printing has already been pigeon-holed. In the public imagination, the technology belongs in a science museum, or sitting on some DIY hobbyist’s desk. When put to work in industry, it’s limited to whipping out a few prototype variations, one-off pieces, or parts that require only a very short print run. The cars, guns, and oddball chess sets made by 3D printers are mere curios, made by the handful. When it comes to the world of mass production, manufacturers continue to turn to other technologies.

That’s the story so far. But it won’t be the story for long. “People are beginning to see the potential for high volume,” says Neil Hopkinson, a professor of mechanical engineering at the University of Sheffield, in the U.K. “The biggest resistor is the cost of a part.”

A recent paper in the U.K. pointed to just what needs to change to exploit that potential, and for the cost of the part to come down: if additive techniques could pick up the pace, to the tune of somewhere between four and ten times as fast as the current rate of 3D printing production, the technology would become competitive with anything else found on a factory floor.

“Laser sintering is a bottleneck to the whole process,” says Hopkinson of the method that stacks one layer on top another, fusing them with a laser. “If you want to make big parts or lots of really small parts, it’s prohibitively slow and expensive.” Hopkins has shown an alternative with a much wider neck. His method uses inkjet technology to print an infrared absorbing ink onto the bed, and use that to center the material. Behind the print head is a lamp, which heats the infrared ink and melts the particles beneath it.

Depending on the size of the printing bed and the size and complexity of the object, Hopkinson’s method has the potential to be ten to 100 times faster than current laser centering technology.

As the speed increases and the cost comes down, manufacturers who used to rely on machining and injection molding will turn to 3D printing, and those with a lower production volume are likely to make the switch first. Where companies currently use machining for a few thousand parts, the material is restricted to metal. By turning to 3D printing, plastics become an option.

With increased production, the cost of those plastics will come way down as well, making the whole technology easier on the budget. It’s only because 3D printing remains a niche means of production that the cost of materials is so high. The same materials cost much less when slated for injection molding, but only because of the size of the market. As 3D technology speeds up and spreads out, materials companies are likely to drop the costs as they rise to meet the demand. “A lot of material suppliers have historically not been interested in the field of rapid prototyping,” says Hopkinson, “They can see that high-volume additive manufacturing is on the way, and they are preparing to get those materials ready for market.”

Many injection-molding companies recognize that 3D printing may soon take a bite out of their business and are investing in their own 3D printing machines. But they needn’t worry that injection molding will go the way of linotype. 3D printing has a much narrower range of materials available to it.

Already 3D printing is on the rise for consumer products. Today, iPhone cases have been printed by the thousands and companies like Nike have turned to 3D printing for complex, limited run shapes—both using current with laser centering techniques. Once inkjet or other methods replace laser centering the world will be filled with printed products. Just as the last here years have seen a boom 3D printing in the home, “the next five years will be characterized by a much bigger growth of industrial additive manufacturing,” says Hopkinson.

“Over ten years ago I predicted we’d start using laser centering to make products in the low thousands. I think most people thought that was rubbish and would never happen,” says Hopkinson. “But it’s happening.” The manufacturing world is now more accepting of the next leap. “I would say the majority of people believe it’s going to happen,” he claims.

Learn more about best practices and trends in additive manufacturing and 3D printing at AM3D India 2015.

For Further Discussion
Laser sintering is a bottleneck to the whole process. If you want to make big parts or lots of really small parts, it's prohibitively slow and expensive.Prof. Neil Hopkinson, University of Sheffield