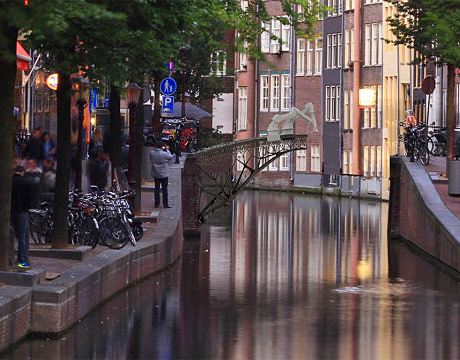 The much-touted benefits of 3D printing: affordability, flexibility, and rapid production, have largely been unavailable for large-scale projects. If you want to print something bigger than a breadbox in a single pass, good luck finding the tools. Tables, bridges, and buildings are not going to come out of a MakerBot Replicator, or a Stratsys Fortus 900mc, for that matter.

This is the conundrum that faced the folksat MX3D, a furniture and manufacturing company out of Amsterdam. “We wanted a printer that could print a full piece of furniture,” says mechanical engineer Tim Geurtjens, the company’s chief technical officer. “We found it didn’t exist. So, OK we have to do it ourselves.”

To be free of the box, they wanted to make a machine that would print in lines, rather than in layers. After some experiments with resin, they realized they needed a stronger material, like steel. The answer to that need was the welding robot. Before long the team had developed robots capable of spitting out steel in long, curving lines, drawing them in the air like some kind marker for three dimensions.

To show off their technology, Geurtjens and his colleagues decided they needed a suitable demo to show off the capabilities of their new technology. “It had to be a bridge,” says Geurtjens. “A bridge is a really symbolic thing, poetically very nice, but it also shows that with our technique you can build really big structures, virtually unlimited in size.” Never mind that their town is one with some 60 miles of canals.

A few snags stood in the way of putting the welding robot to work. Early on, the nozzle would occasionally get stuck if the line it was printing grew faster than the software anticipated. So Geurtjens and his team used a laser distance sensor to continuously keep track of the position of the object and compare that to its theoretical position. In the future, they want to print their bridge with two robots that could start on either side of a canal and meet, for completion, in the middle. To do that, they’ll have to be able to communicate their positions to each other and adjust as they go.

Because of the need for all this real-time positional adjustment, the MX3D printer can be tinkered with on the fly, unlike other 3D printers that run until they finish after the start button has been pushed. As Geurtjens puts it, “Since we have to constantly adjust, it means we can constantly adjust.”

Ultimately, though, MX3D wants its welding robot to do its own adjustments. If things go as planned, they want it to do its own design as well. “Our idea is to have software design the bridge,” says Geurtjens. They’ve already made some strides in that direction. When they first started out, the software drove the robot, and humans had to manually determine the tool path. Now the software creates the tool path automatically. “What we are working on now is expanding that even further so the robot will determine its own strategy. Maybe it’s Utopian, but we want to have software that’s fully automated,” he says.

However autonomous the printer welder becomes, it’s already poised to make big changes in big structures. Once the firm prints the final functional bridge it may have to do a few more, as additional bridge orders are already in. Then Geurtjens hopes to tackle the more dangerous parts of construction. “There’s a lot of stuff people don’t want to do but just have to do,” says Geurtjens. “What if we can have those taken taken over by robots?” Buildings will became safer to build, but also more interesting to look at. “If you look at architecture, decoration has gone out it. It’s all flat facades, square corners. It’s too expensive to decorate,” says Geurtjens. “With a technique like this, it doesn’t mater any more, just send the info to a robot and it will do what you tell it to and it doesn’t cost much more.”

Looking even further into the future, Geurtjens says robots may help us on other worlds. “In the unlikely case that we colonize Mars or the Moon, we can send the robots there first, and in a few years we can join them and live in the houses they’ve printed,” he says. Until then we can still enjoy a nice terrestrial stroll over a canal on a 3D printed bridge—soon.

Learn more about the latest technologies in 3D printing at ASME’s AM3D.

For Further Discussion
A bridge is a really symbolic thing, poetically very nice, but it also shows that with our technique you can build really big structures, virtually unlimited in size.Tim Geurtjens, chief technical officer, MX3D