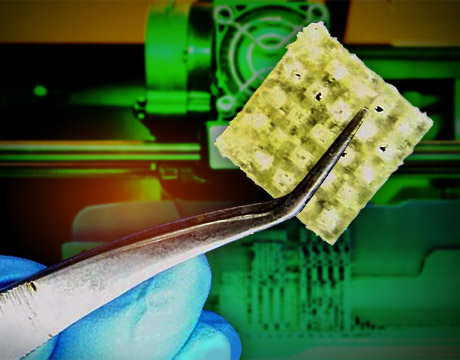 Millions of skeletons the world over have been fixed with bone grafts. But the procedure has some persistent limitations. For one thing, a new piece of bone has to come from somewhere, and that usually means either making a withdraw from a “bone bank” or a withdraw from somewhere else on the patient’s body. “Autografts” require an additional procedure, while “allographs” increase the risk of the body rejecting the new piece. In either case, the amount of bone that can be used is limited. Where a bone defect or injury is massive, other solutions have to be found. And whatever the size of the graft, the surgeon has to shape it to fit the injury. The whole process is complex and expensive. Meanwhile, bone disorders are expected to double within the decade.

All these problems would dissolve like so many biodegradable implants if grafts could be printed with a suitable 3D printer. And, in fact, researchers from Bacterin, working with Montana State University, have created just that.

“The concept is that you’ll have a 3D printer in the hospital that has autoclavable parts,” says Daniel Cox, a Product Development Specialist with Bacterin. After putting the sterile parts in the machine, and inserting a cartridge with the polymer, surgeons could print up exactly the right fragment on the spot.

Such a printer would save much more than time and money. “If you could print fast enough, you could see something in trauma,” says Cox. “If someone’s missing a large enough section of femur or tibia, the only course we currently have is to amputate. Instead you might be able print that with a structurally sound polymer, which they could then implant and get it to eventually grow back into the patient’s own bone.”

Speed would be a crucial element for any print job that was meant to save a limb. That’s why Cox and his team went with digital light printing over other types of 3D printing. Previous attempts to print bone graft material have required a binder between each layer of bone particulate. With DLP each layer is cross-linked immediately to the layer before it. As a result, Cox’s printer is likely to produce ten times faster, depending on the size of the part needed.

The technique has another advantage. Since the printer uses a polymer with real bone, the high heat used with other methods would denature the proteins. There’s no risk of that with the UV light used to project each layer on the Bacterin printer.

The chief challenge of the project was getting the polymer right. The viscosity had to be just so to get flow from the printer head but not have the bone particles fall out of the solution. “In a project like this, at least once or twice you think ‘It’s impossible,’ ” says Cox. “If you don’t, it’s probably not innovative anyway.”

For Cox, though, there was always enough motivation to push on. “One of the main things, that really got me looking at this, is the concept of aesthetic bone grafting in juveniles,” he says. Adults with cranial and facial defects are often patched up with plastic or metal implants. But since neither material can grow, children with similar problems will either end up with a permanent deformity or need multiple surgeries. “This allows the structure to be sound and look aesthetic. It would grow back to the patient’s own bone and allow the child to grow with the implant. That was a main goal for me.”

As of now, the only patient to benefit from the new printer is a rat. And the rat effectively “resorbed” the implant (that is, as the graft material broke down it was replaced with the rat’s own bone).

There’s still “a lot of material science and things like that” to be done before there’s a bone graft printer in every hospital, for us larger animals. But it’s only a matter of time before 3D printing makes bone grafts more precise, cheaper, and speedily available to all.

For Further Discussion
In a project like this, at least once or twice you think, ‘It’s impossible.’ If you don’t, it’s probably not innovative anyway.Daniel Cox, Bacterin