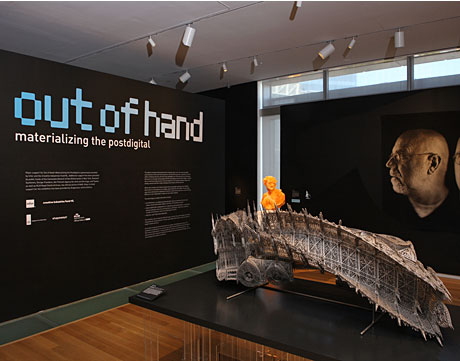 Installation view of Out of Hand: Materializing the Postdigital.
Image: Ed Watkins

Last fall, the global art world was awash in exhibitions featuring the latest in 3D printed prints, sculptures, photographs, and other manufactured works of techno-aesthetics.

Artists are training their additive manufacturing (AM) sights on subjects ranging from Andy Warhol’s hair to the formerly unseeable phenomenon of motion, displaying their 3D wares in elite galleries.

Sculptor Frank Stella and designer Maya Lin are among the best-known established artists who have adapted AM technologies to express their creative vision. They and more than 80 other digital DaVincis are featured in “Out of Hand: Materializing the Post Digital,” billed as the world’s first major museum exhibition exploring the impacts of digital fabrication technologies on art and design. Running through June 2014, at New York’s Museum of Art and Design (MAD), the collection showcases works from around the world produced during the medium’s first transitional decade.

David McFadden, MAD’s chief curator, says the exhibit’s importance goes beyond aesthetics. “By examining these trends through the lens of artistic expression, MAD is opening up a dialogue on the significance of digital technologies to our larger culture and global society.”

Across the pond, Britain’s second annual 3D Printshow took over the London Business Design Centre in November with what it claims to be the world’s largest collection of 3D-printed artworks. The event, and its repeat performances in Paris and New York, surveys the state of the art in AM in industry and medicine. For example, last year’s attention grabber was the world’s first 3D-printed car, Urbee, from KOR EcoLogic and Stratasys. But more and more focus is being devoted to fine art and design, its organizers say.

The show’s website emphatically states that 3D Printshow is “not a tradeshow.” But in borrowing some of the traditional trappings such as an exhibition and professional conferences, the fair underscores the integral commercial and technological aspects of the discipline. Any art buff knows that’s Andy Warhol’s territory.

The man who called his studio a Factory and famously elevated soup cans into fine art would have embraced 3D printing, say the proprietors of the Andy Warhol Museum in Pittsburgh. In June, the museum unfurled “Factory 2.0,” a collection of 3D-printed reinterpretations of Warhol or Warhol-esque works. From absurdly enormous depictions of Warhol’s signature fright wigs to copies of iconic artworks such as “Eight Elvises,” the exhibit explores the artist’s fascination with mass production, mass marketing, and mass consumption. Belgian 3D printer Materialise joined in the fun, displaying the 3D-printed Pop Art-inspired works of five finalists entered in its online Andy Warhol Contest.

Few companies in the world symbolize the synergies between business, design, and technology better than Nike – and even fewer take the trouble to create stunning works of art to celebrate those connections. Nike’s recent art exhibit, “The Art and Science of Supernatural Motion,” is a perfect case in point. To coincide with the launch of new high-tech running shoes, Nike enlisted digital artist Daniel Widrig to capture the “essence of the body in motion” in a sculpture.

Widrig, designer of the first 3D-printed dress, chose to create a 4-meter-long spiraling wall sculpture based on a series of digital images showing a figure in motion. Due to its size, the work had to be created in three pieces and invisibly bound together. Working with Materialise’s experts and its mammoth stereolithography machine, Widrig had to print the huge design in three pieces, but his vision required it to look like one harmonious structure. That required intricate design algorithms to create unseen snap-together connection points and other support features strong enough to hold the components together discretely. The finished product briefly toured galleries in Milan, Tokyo, London, and New York before landing in its permanent home at Nike headquarters in Oregon last fall.

For Further Discussion
We are opening up a dialogue on the significance of digital technologies to our larger culture and global society.David McFadden, chief curator, New York’s Museum of Art and Design