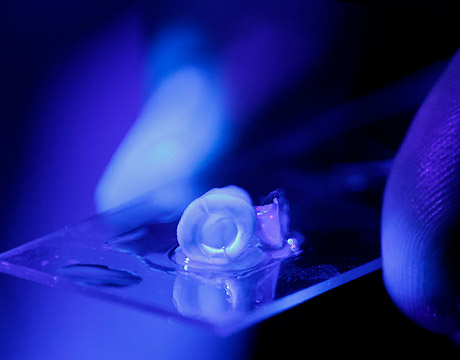 One of the teeth used to create a new process to treat root canals. Credit: Kristyna Wentz-Graff, OHSU

Bioengineers at an Oregon dental school are using 3-D bioprinting to take some of the bite out of root canal therapy. Their fabricated vasculature restores natural blood flow to a treated tooth, leaving it healthier and more resistant to damage and reinfection – two major reasons for repeated root canal treatments.

More than 15 million people undergo root canal therapy every year. It’s a beneficial treatment that relieves pain and lets patients retain their natural teeth longer. But root canals rank right up there with colonoscopy and mammography in the rogue’s gallery of beneficial but dreaded medical procedures. What’s worse, in a small but significant number of cases, the treated tooth becomes reinfected or damaged and the patient has to undergo another dreaded root canal. X-rays, anesthesia and new materials have made the tooth-saving treatment safer and more comfortable, but no one wants to go through it twice. Once perfected, this new 3-D printing method could keep treated teeth alive and healthier, decreasing the need for second root canals.

In current treatments, the infected blood vessels and nerve tissues inside the root canal are completely removed, replaced with a biomaterial and sealed with a crown. But Luiz Bertassoni, an assistant professor of restorative dentistry and biomedical engineering at Oregon Health & Science University (Portland), believes his work could lead to root canal treatments that actually restore a living pre-vascularlized pulp-like tissue construct to the treated tooth.

“We believe this finding may change the way that root canal treatments are done in the future,” he says. “(The traditional) process eliminates the tooth’s blood and nerve supply, rendering it lifeless and void of any biological response or defense mechanism.” Teeth without that functionality are more likely to be lost much sooner, resulting in bigger problems like the need for dentures or dental implants, he says. “Fabrication of artificial blood vessels can be a highly effective strategy for fully regenerating the function of teeth.”

More for You: Read about the latest in bioengineering from ASME.org

Bertassoni has already made strides in growing networks of blood vessels and capillaries that could potentially support the fabrication of large, complex human tissues and organs for transplantation. Central to this work wasdevelopment of a 3-D micromolding technique using bioprinted agarose template fibers to create capillary-like microchannel networks within hydrogel scaffolds.The current work zeroes in on the dental vasculature to put those earlier findings to work.

The work was carried out using extracted human premolars that were shaped into 9-mm-long root fragments and sectioned longitudinally. The interior soft tissues and vasculature were removed. The two halves were reconnected and held in place with laboratory film. The team placed a 500-micrometer-diameter agarose fiber mold created with their specialized3-D printing method into the center of vacant root canal. They then injected a biocompatible gelatin methacryloyl (GelMA) hydrogel scaffold containing dental pulp cells into the canal, surrounding the fiber mold. After the hydrogel was allowed to photopolymerize, the team extracted the fiber mold, leaving a 500-micrometer microchannel in its place. They inserted endothelial colony forming cells grown from the interior lining of blood vessels into this void and allowed them to grow for a week. Afterward, the artificial construct had begun to grow dentin-forming cells near the tooth walls and an artificial vasculature within the root canal.