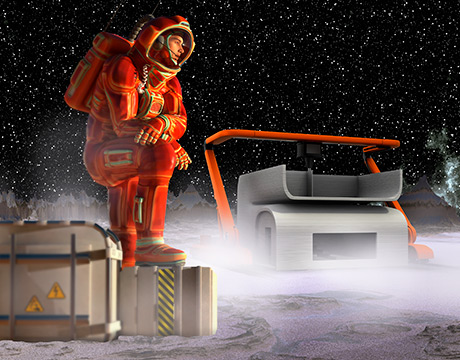 Speculating about life on other planets has fueled science fiction novels and movies for decades. But how often do we consider our own lives on another planet, seeing ourselves as the visitors from space? Just how would humans live their lives and meet all of their needs on another planet?

A team at Northwestern University believed being able to manufacture many of the goods needed ourselves was the key, in particular our housing and shelter. And several members of the team went on to found Dimension Inx, in Chicago, IL, where they are creating a way to do just that and more. Even if the chance to apply or test their concept on other planets may be many decades away.

[The material] is no longer flexible but stronger, and the iron oxide in there can make it magnetic because metal parts are in there. Ramille Shah, co-founder, Dimension Inx 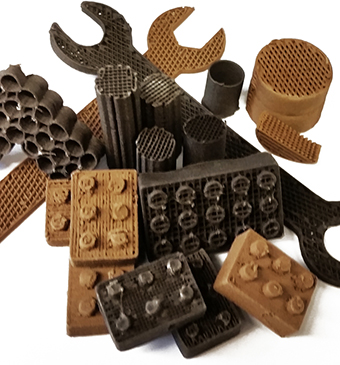 Just about any material could be 3D printed on the surface of another planet with a new “3D painting” process. Image: Dimension Inx

“We can take these green bodies and we sinter the particles together by putting them into a furnace after the printer. It burns off the polymer and makes these ceramic-type structures,” says co-founder Ramille Shah, also assistant professor at Northwestern University. “[The material] is no longer flexible but stronger, and the iron oxide in there can make it magnetic because metal parts are in there.”

The process could be used to construct durable buildings or shelters on other planets, says co-founder Adam Jakus, who was a postdoctoral fellow at Northwestern University when he started working on the project. Housing is clearly one of the most important aspects to colonizing other worlds. “[An important] part of our work is that you don’t have to use a powder bed. And all the materials [we use] can be found on the places you’d first be considering for colonization, like the moon and Mars,” he says. “Even if it isn’t then, you could bring the material and it can be recycled.”

The materials they used to test whether the method could potentially work were NASA-approved for Mars and the moon, Jakus says. One member of the team, Katie Koube, had worked at NASA as an intern.

“She was looking at our 3D printing process and painting 3D biomaterials and that’s when we realized other materials could be implemented,” Jakus says. “You don’t change the way you paint. If you want to 3D print steel or 3D print ovary tissue, you don’t change the way you do it. It’s still about getting the raw materials. Then it comes down to knowing what to do with them.”