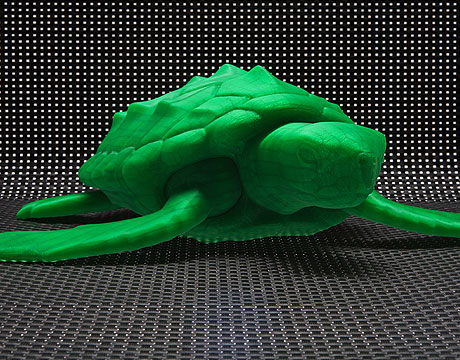 3D modeling has had its issues when it comes to animal modeling. But one biologist and his team set out to change that.

“I study animal form and function and have worked with gekkos, snakes, lizards, and other living creatures,” says Duncan Irschick, professor in the department of biology at the University of Massachusetts at Amherst. “I worked with sharks starting in 2012 and I was interested in making 3D models, but, well, it’s hard to get a tiger shark in a museum. I did research and came across photogrammetry, a system involving taking pictures that become models. It’s been around but really blossomed in the last few years.”

Catch Them if You Can

Irschick says the software and cameras have become better and computers faster, but he didn’t find much hardware for what he wanted to do. “Living animals move so much and I realized I really needed a multi-camera system, so I worked with engineering students to create the right one,” says Irschick, who is also co-director of the center for evolutionary materials at the University of Massachusetts at Amherst. “You can’t walk around a shark easily on a boat. It’s a precarious situation so we have a series of flexible arms. You want photos that overlap which means you arrange the arms. And a good part of it is know-how for arranging the cameras. [Our device] has four cameras and all components are off-the-shelf; a high-end consumer camera, using a Loc-Line for the arms and more. We 3D printed mounts.” He also says you can use any number of cameras but they went with a Canon G16 for initial models.

They use photo floods for better lighting, and you take the camera system and place it on different points on the animal and rotate it. “We have a system of sweeping it in a circle,” he says. They also used software such as Memento.

The biggest issue they found was the animal’s movement. If the subject moves, he says, it’s time to start over and, therefore, you need high-speed photography. “What we’re doing can possibly be a great opportunity to develop a platform to scan live animals,” he says. “We can maybe use it for things well beyond animal form and function to understand how it can help human design.”

The potential exists for a number of different spin-offs, he says. “I think we’re definitely interested in creating tabletop versions that will offer high resolution,” he says. “We’re having a blast and we’re seeing a lot of people excited. I think working with animals requires patience but there are great rewards. There could also be non-living uses for it. For example, you can have a museum with millions of objects such as pottery and bones and most museums want to preserve the shape, size, and structure and don’t want to scan each object. It could be possible to do it in a matter of seconds and preserve wonderful artifacts. And, it doesn’t hurt that it could cost less money.” Eric Butterman is an independent writer.

Learn more about the latest in additive manufacturing at ASME’sAM3D Conference & Expo.

For Further Discussion
What we’re doing can possibly be a great opportunity to develop a platform to scan live animals.Prof. Duncan Irschick, University of Massachusetts at Amherst