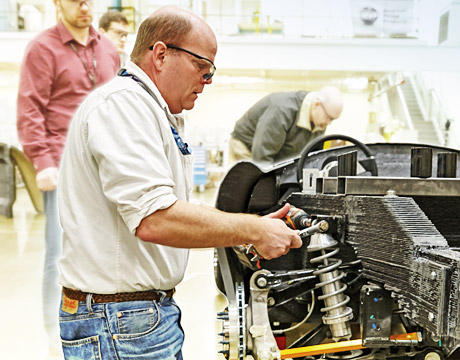 The rapid pace of development in advanced manufacturing is emanating from myriad laboratories and manufacturing plants, as researchers and professionals search for new products in industries ranging from biotechnology to aeronautics. As the range of applications becomes wider, development times are shrinking while equipment is growing larger. New 3D printers are getting big, and one now has a build volume of 8 feet x 20 feet x 6 feet.

The printer’s developers, machine tool manufacturer Cincinnati Inc. and the Dept. of Energy’s Oak Ridge National Laboratory, builds on the original 6-foot x 13-foot x 3-foot Big Area Additive Manufacturing machine that prints up to a whopping rate of 10 pounds per hour of composite thermoplastic material. The second-generation machine improves on that: It can print at previously unheard-of rates of up to 100 pounds per hour, drawing on a new extrusion system developed by ORNL engineers.

BAAM found fame in 2014 when it printed parts for custom-car startup Local Motors over 44 hours at the IMTS show in Chicago. It then followed by printing parts earlier this year for a Shelby Cobra. Most impressive, says Lonnie Love, group leader of ORNL’s Automation, Robotics and Manufacturing Group, is engineers developed the Big Area technology over a span of only six months.

ORNL signed a cooperative agreement with Cincinnati in March 2014, with the goal of printing a Local Motors Strati vehicle the coming September at the International Manufacturing Technology Show. “We committed to printing a car with this technology before we had a system,” says Love. “It’s a dramatic example of solving problems quickly.”

The feat is perhaps more impressive considering ORNL first began work on 3D printing in 2012 with polymer systems, says Love. ORNL’s manufacturer demonstration facility is charged to develop new materials and processes, and then move technology to mainstream manufacturing. Love says a wide variety of end users, such as aeronautical firms, visit and work there, looking for an eventual end product.

Researchers started with refining plastics used in 3D printing, which were problematic because of variable internal stresses. The first big breakthrough came in January 2013, with the introduction of carbon fiber to the raw plastics. “It was a game-changer,” says Love. “You’ve got these stresses. When you put carbon fiber in, all of that goes away.”

The next step was to find a company to build a printer capable of producing large objects. At the beginning of 2014, Cincinnati executives became interested. The firm already had developed high-speed gantry and laser-cutting systems, which dovetailed nicely with ORNL’s preliminary work on large-scale 3D printers. Within three months Cincinnati developed the first gantry for a 3D printer, says Love.

“Oak Ridge had the concept to use plastics and large-scale extruders and mount on a gantry,” says Rick Neff, Cincinnatti’s head of market development. “We had been asking, ‘How do we get involved in 3D printing?’ We make gantries. So it is a little like chocolate and peanut butter.”

Still, scaling up the technology involved some trial and error. Love notes that most 3D printers are fairly small machines that work slowly, growing parts at a rate of about one cubic inch per hour for a final product that if usually less than one cubic foot in volume. Feedstock plastics also cost between $50 to $100 per pound, “expensive,” he says.

The first BAAM machine can pump out 10 pounds of material per hour and grow a product at rate of 250 cubic inches per hour. “But we found that making bigger parts presented some problems,” says Love. “It’s the Goldilocks effect.”

Love and his team found challenges in maintaining thermal control. There were distortion and slumping issues with smaller pieces that melted, and bonding problems between layers of large pieces. As the extruder’s nozzle lays down material, the greater distances the nozzle must pass over larger parts can allow the material to cool. That causes bonding problems when the next layer is applied.

“We had to find the sweet spot in the middle, and try to keep the energy intensity as low as possible,” he says. “The first time we printed car parts, the layers split like a deck of cards.”

The team now works with standard injection molding pellets heated to 210 degrees Celsius, at low pressures. “We’re not pushing at high pressure, there’s not a lot heat and speeds are moderate,” says Love. “Now we can put a lot of material down very fast.” Reduced material costs in the range of 3 cents to 10 cents per cubic inch also make printing in large volumes affordable, he emphasizes.

Cincinnati’s gantries can operate at very high speeds of up 200 inches per second, and researchers were tasked with developing an extruder capable of pushing large volume of materials precisely. When the project began, the gantry worked at about one inch per second, applying 10 pounds per hour of material through a 0.3-inch nozzle. At that rate, it would have taken over a week to print the parts for Local Motors Strati vehicle.

Love says two weeks before they were scheduled to print the car parts, ORNL engineers perfected a new screw that pushed the flow rate to 40 pounds per hour, pushing the gantry speed to four inches per second, and cutting down the time to print the car to 44 hours. Researchers are now experimenting with different nozzle sizes and speeds. Local Motors has already announced it will leverage the technology and open two car printing facilities, one in Knoxville, TN, close to ORNL.

Neff says Cincinnati has produced five machines so far, and sold three of them. But he believes the market for them is still forming. “This is so revolutionary,” he notes. “When we were printing the [Local Motors] car at the IMTS show, people were looking at it and were wowed. But they weren’t saying, “I have the perfect application for this.”

Neff believes the technology will be applicable for prototyping new car designs, but both he and Love think the greater impact will be in producing machine tools and industrial molds. “The killer application is going to be in tooling,” says Love. “If you can make a mold in one day for $1,000, it will be a game changer for the manufacturer.”

Learn more about the issues and challenges associated with every step of the additive manufacturing lifecycle atAM3DConference and Expo.

For Further Discussion
We had to find the sweet spot in the middle, and try to keep the energy intensity as low as possible. The first time we printed car parts, the layers split like a deck of cards.Lonnie Love, Oak Ridge National Laboratory