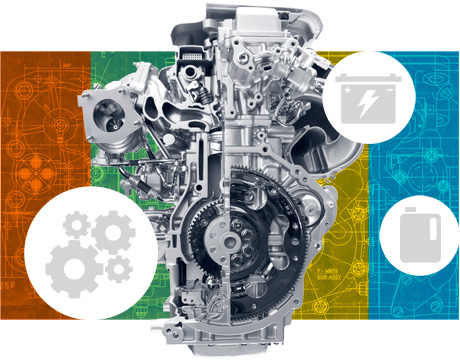 "Weight reduction in vehicle subsystems is also being tested by using lightweight structures made from alternative materials such as aluminum, magnesium, composites, plastics, and multi-material construction," adds Rizzoni.

Battery management systems are being designed to meet performance, life, and warranty goals for both batteries and their monitoring and management systems. "Automakers need to fully understand how varying operational limits affect the life of battery systems through extensive testing and modeling, followed by developing sophisticated algorithms to track and predict various parameters, such as state of charge and state of health through the life of the battery," comments Rizzoni.

In order to expand battery operating range and reduce costs, some researchers are designing and testing new battery chemistries and subsystems. Advanced chemistries could allow batteries to operate through greater temperature extremes, last longer, and reduce weight and cost. Other efforts are being made to reduce the cost of the ancillary systems, such as cooling, to further reduce the total cost of the battery system.

The two main benefits in downsizing an internal combustion engine are thermodynamic and mechanical. "From a thermodynamic point of view, the engine operation will move towards higher loads, at which the engine efficiency is higher," says Rizzoni. "From the mechanical point of view, the positive aspect lies in the reduction of the friction in the piston units, together with the reduction of the number of cylinders."

Downsized engines are lighter than conventional engines, thereby reducing vehicle mass and the improving vehicle fuel consumption. Turbocharging recovers the energy of the exhaust gasses to increase the inducted charge, therefore increasing the power-to-displacement ratio. "A downsized and turbocharged engine has the potential to have the same or better performance as a non-downsized, normally aspirated engine, with the advantage of a significant increase of fuel efficiency," says Rizzoni.

Engineers are working to increase the efficiency of internal combustion engines by developing several advanced combustion modes. One of these modes is called (homogeneous charge compression ignition) HCCI. In the HCCI combustion, a highly homogenized mixture of air, fuel, and combustion products from the previous cycle is auto-ignited by compression. "This combustion mode aims at combining the advantages of modern diesel and gasoline combustion processes, namely low emissions and high efficiency," states Rizzoni.

Another research trend targets ways to recover the energy that is normally dissipated through the coolant and the exhaust gas systems of automotive powertrains using innovative waste heat recovery devices. These systems can convert thermal energy into mechanical or electrical energy, thus increasing the overall efficiency of the vehicle. Organic Rankine cycle, thermoelectric systems, turbocompounding, and recuperative thermal management systems all have potential for significantly increase engine efficiencies.

A smaller but still significant aspect of fuel-efficiency research is called "intelligent energy management." "This ability to more intelligently control the accessory loads in a vehicle—such as the alternator or power steering, etc.—will also contribute to better gas mileage," says Rizzoni. "With smarter control of these loads and the addition of stop-start technology there can be significant increases in fuel economy, with small or no increase in total vehicle cost."

A downsized and turbocharged engine has the potential to have the same or better performance as a non-downsized, normally aspirated engine.Giorgio Rizzoni, director, OSU CAR