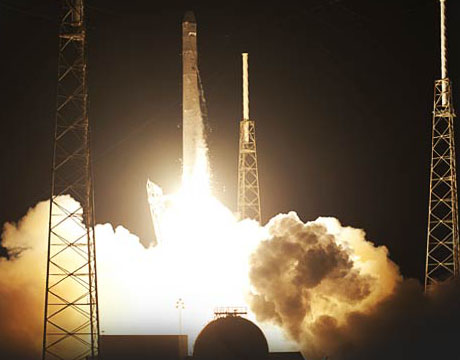 "Splashdown! Welcome home #Dragon!" tweeted SpaceX at 8:42 a.m., PDT on May 31, 2012, after its unmanned capsule splashed down in the Pacific Ocean, marking the successful completion of the first private test mission to resupply the International Space Station (ISS) and bring cargo back to earth.

Developed by California-based Space Exploration Technologies Corp. (SpaceX), the Dragon went into space atop a Falcon 9 rocket that blasted off from Cape Canaveral Air Force Station on May 22, 2012. Over the nine-day test voyage, it berthed on the ISS, unloaded and loaded cargo, and returned to earth without any major glitches. Since NASA ended its space shuttle program last year, this successful test mission should pave the way for SpaceX, the brain child of billionaire founder CEO Elon Musk, to begin the $1.6-billion space station resupply operations contract covering 12 flights through 2015.

For Mike Horkachuck, NASA's project executive for SpaceX and a mechanical engineer with almost 30 years of experience, the run-up to the launch seemed like the run-up to the Apollo Mission. "We have the benefit of all the experience of Apollo and shuttle and space station engineers being able to lend their experience of how systems work in space and operate. NASA has been able to leverage and transfer that experience to the U.S. industry and that's part of our role, to make the country better and more competitive," he says. The Dragon is a free-flying, returnable spacecraft developed by SpaceX under NASA's Commercial Orbital Transportation Services (COTS) program. It is made up of a pressurized capsule that carried pressurized cargo on the mission and an unpressurized trunk that houses its solar panels and can be used to carry unpressurized cargo. With the solar panels fully extended, the vehicle measures 16.5 meters (54 feet) wide. Falcon 9 is a two-stage rocket powered by liquid oxygen and rocket grade kerosene (RP-1).

Over the past few years, NASA engineers worked closely with SpaceX to develop the Dragon and the Falcon 9 rocket. "It has been really rewarding too, as I have been able to reach back to NASA's subject matter experts whenever there have been areas that my team has identified where it might be good to have a second set of eyes on certain aspects of the design of the rocket," says Horkachuck. The shuttle that carried cargo, crew, and a robotic arm was complicated and expensive to maintain, explains Horkachuck, whereas the Dragon capsule is more purposed and cheaper. "Falcon is a liquid fuel rocket, very similar to the Apollo first stage. It's a basic good-lifting vehicle and has the ability to produce a lot of thrust off the pad. The difference though is that it's less than a million pounds of thrust for Falcon 9 compared to 7.5 million pounds for the shuttle," he adds.

NASA was involved since the early concept level, with insight into the design of the Dragon. It participated in all the design and development phases from a review-process perspective and also witnessed testing events. "We did wet-dress rehearsals when they fueled up the rocket and simulated a launch to check if systems were working correctly and timing was correct. Also, we reviewed qualification and individual hardware acceptance test reports of all the individual components going into the vehicle," says Horkachuck.

Designed in cooperation with NASA, Dragon's powerful heat shield is made of a material called PICA-X, a high-performance variant on NASA's original phenolic impregnated carbon ablator (PICA). "When I look back, the heat shield was a big question in the design phase. The rendezvous and proximity operations and the sensors used for it are always a challenge," says Horkachuck. "There was a lot of work that went on to make sure the system that allows communication between ISS and the Dragon worked correctly and that there were no interferences that could create problems during the approach phase," he adds. NASA authorized the flight after Dragon completed all tests in preparation.

Although this test mission carried only cargo, SpaceX hopes to carry astronauts aboard the Dragon eventually. SpaceX's crew-carrying craft will be an upgraded version of the Dragon that was used for the current cargo mission. It is a fairly early prototype, however, says Horkachuck. "When we jump from carrying cargo to crew, there is a lot more scrutiny, as you are risking somebody's life. There are some optimistic projections of two to three years. I would think it will be closer to four to five years." To Infinity and Beyond

Horkachuck would like to see American astronauts on American commercial vehicles flying to ISS regularly again and is hopeful that would free-up money for NASA to develop a new generation of spacecraft to go further into space, to where it has never gone before for missions beyond Earth orbit including asteroids, the moon, and eventually Mars.

SpaceX and three other companies: Blue Origin, the Boeing Co., and Sierra Nevada Corp., are working on crew-carrying spacecraft. "The long-term goal would be to have them flying private citizens commercially and potentially starting a whole new industry like the airline industry. That's a long way into the future and we have to make a significant improvement in cost to get a large number of general public to fly on a private spacecraft. This is the starting point of that process," says Horkachuk.

Horkachuck believes there is a huge opportunity out there for young engineers to get involved in this new era of private space travel. "The age group of engineers working on the Apollo was in the 20s and 30s and they were all developing these new capabilities and learning as they went to do things they didn't know how to do." Working in such a rapidly evolving environment, he adds, where young engineers get to design, build, and fly in a fairly short period of time, is great for their confidence.

There was a lot of work that went on to make sure the system that allows communication between ISS and the Dragon worked correctly and that there were no interferences that could create problems during the approach phase.Mike Horkachuck, NASA's project executive for SpaceX