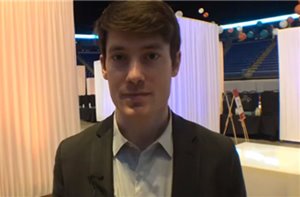 Steven Hoffenson
Have you considered going to graduate school? Doing a PhD? Becoming a professor? When I was in college I had no idea that I would one day be a professor. I actually had no idea that I wanted to go to graduate school until probably the end of my junior year of college. I want to share with you some of my experiences in academia, and tell you a little bit about what a career in academia looks like.

The key decision point that led me along this career path was going from college straight to grad school. And there were two major things that contributed to that decision. The first one is that one of my professors informed me that PhD students in engineering actually get paid. I had never really considered grad school because I didn’t want to go into debt to pay tuition or to live with no income. He informed me that as an engineering PhD student, I wouldn't have to pay tuition, and I'd actually get a stipend to live on. So that opened the door. The second piece was that the internships I’d had during college just didn't do it for me. For instance, I worked for a beer company on a bottling line, which sounded really cool as a 19 year old, but about halfway through the summer I was driving home and thinking, “If I hadn't gone to work today, what would be different? There’s still going to be beer on the shelves. It's going to cost the same. Probably the biggest impact I might make is some minor efficiency improvements.” So that wasn't the place for me. My next two summers didn't really gel with me either. So I decided going to graduate school would be a way to expand my career options in a way that would give me opportunities to be more impactful on the world. 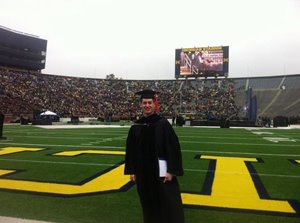 When I got to graduate school there were a couple of big adjustments to make. The first one was that, while we did get paid, it wasn't a real engineer’s salary. I was making like $22,000 dollars a year. I passed on a full-time job offer that was going to pay more than three times that. So, I didn't feel like a real adult. I had roommates until I was 27. The second big adjustment was in time management. I thought I was a master of time management when I was in college. I had been an engineering major, a spanish minor, and I was in three honors programs, all the honor societies, a fraternity, was a tour guide, an Engineering Ambassador, and I taught some classes. Getting a PhD, the primary deliverable is that you have three to four original research papers. Those aren't going to all happen right at the end of your degree. You really have to learn to pace yourself and make steady contributions to your research over a four to five-year period. It takes a lot of drive and a totally different type of time management to do research in academia. 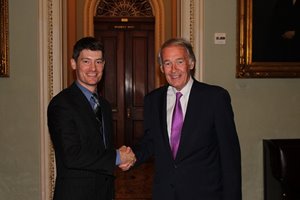 Moving to Washington D.C. was a huge culture shock. After I finished my Ph.D., I did a post-doc in Sweden at Chalmers University of Technology. After that, I moved back to the US and took a one-year congressional fellowship in D.C., where I worked for a U.S. Senator as a policy advisor for energy transportation, nuclear and science issues. The congressional fellowship was a unique experience. Working in Sweden before that wasn't even as much of a culture shock. During the fellowship, I had people looking over my shoulder, literally, telling me what to do on a daily, sometimes even hourly, basis, which is totally different from what I experienced in academia. The other surprising thing about working in D.C. was the importance of politics. You could have a policy that makes sense from every scientific perspective and every metric that you care about, but if it doesn't match with a certain part of the constituency or a certain part of the party, you couldn't even talk about it. Having to abandon good ideas because of reasons that were not really scientific, bothered me.

I fled Washington and went back to academia. Now, I'm a faculty member at Stevens Institute. I've been there for two and a half years, and I have my academic freedom back. Even more than as a graduate student, I get to choose what research I do and when I do it. I choose where I want to apply for funding for my research. I choose which students I want to work with. To an extent I choose what classes I teach, and when I go to work. But at the end of the year, I'll need to show my department what I accomplished that year. So, with that academic freedom comes a lot of responsibility. It's still a challenge to manage my time effectively, especially while I have teaching responsibilities, advising responsibilities, and other things that come up that I have to do. Almost every professor I know does some work at home, especially for the first five to ten years. 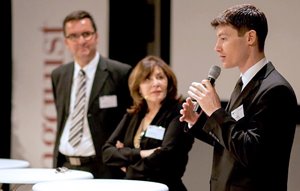 Writing and speaking effectively is incredibly important as an academic. I was one of those high school students who did not love my English classes or my history classes. I liked the math and the science classes. But as a professor, I have to stand in front of people and speak multiple times a week. I also have to write my research results in a clear and concise way that's going to be accepted by peer review for publication. If it's written sloppily, it's going to be judged poorly, even if the science and engineering is sound. So effective writing is key. Effective speaking is key. ASME and other professional societies play a huge role in helping me develop these skills because ASME coordinates the top journal in my field, the Journal of Mechanical Design, as well as the top conference in my field, the International Design Engineering Technical Conferences.

So remember, academia is a career option. If you haven't considered it so far, and you like the idea of freedom to do research in areas that you think are important, you should think about it. With academic freedom, also comes challenges, particularly finding the time to do teaching and research well. Finally, effective communication is an integral part of being an academic.

About the Author: Steven Hoffenson is an Assistant Professor in the School of Systems and Enterprises at Stevens Institute of Technology in Hoboken, New Jersey. He holds a B.S. in Mechanical Engineering from the University of Maryland, College Park, and an M.S.E. and Ph.D. in Mechanical Engineering from the University of Michigan, Ann Arbor. As an undergraduate, Steven had internships at Anheuser-Busch, ExxonMobil and Flowserve Pump Division. Following his Ph.D., Steven worked as a post-doctoral researcher at Chalmers University of Technology in Gothenburg, Sweden, and then he went on to serve as a Congressional fellow in Washington, D.C. His research focuses on design optimization, sustainable design, systems modeling, and policy analysis.