Learning to Thrive in Your First Job at a Large Company

I did my undergrad in India, grad school in the U.S., but both education systems fell short in preparing me for what was coming in my real career. I’ve worked at three different companies so far; Caterpillar Incorporated, which is a giant Fortune 50 company, Corning Incorporated, which is slightly smaller, but still a global company, and most recently Fitbit Incorporated, which is a startup recently publicly listed and trying to grow. Every company has its own distinct characteristics, but I’ve learned two lessons that apply to all the companies I’ve worked for. The first is how to understand the company culture and use it to overcome the learning curve. And the second is how to organize and prioritize your day-to-day life in the professional environment.

Within the first month at Caterpillar I was overwhelmed. I had all these meetings scheduled and hundreds of emails flying around. How do you sort through that? No one taught me about that in grad school. I was like a lost puppy, not understanding how to connect dots. I reached out to my manager, and my manager showed me an org chart, explaining how people are aligned within the company and how information is organized and trickles down from the CEO level to every engineer in the company. Another useful tool was the internal directory. I could just type someone's name, a function, or a keyword and a bunch of names of people would pop up and I would know to contact this person for machining expertise, this person for fuel systems expertise, and so on. The directory became my best friend starting the first week within the company. These tools gave me immediate information, but also gave me a sense of the corporate goals of the company so I could align my personal goals with them.

Then I scheduled one-on-one meetings with key people. I met with key people in fuel systems, engine systems, machining etc. The first thing I learned was that I actually had a personal rapport with a lot of these individuals. I also got some direction regarding corporate goals, my project goals, and what needed to be executed. Finally, I got some advice on how I should run my project based on their experience and information. These things helped me tremendously in excelling at Caterpillar, and again at my other companies as well.

To get things done I had to learn about the company’s various processes and systems. The most complex one was the procurement system. If I wanted to buy a screwdriver, I couldn’t just go to Best Buy or Walmart and buy one. I had to go through a complex system of purchase requests. Some other systems I had to get familiar with were the manufacturing execution system, the drawing management system, and even instructions on how to talk to vendors and suppliers. I also had to learn about different tools to manage the projects, such as Six Sigma. Initially, I had no clue how to use these systems, but after meeting one-on-one with experienced colleagues, things became clearer. The knowledge transfer couldn’t happen overnight, but also involved taking a bunch of training classes, internal and external, to get educated in these systems.

I came to know about the history of the company and understand the work culture. In the process of taking classes, I was introduced to other people within my company, and learned tidbits that helped me understand the company culture. They were simple things I wasn’t aware of, like “no tractor made by a Caterpillar is the same,” or, “Corning helped to make Edison’s glass bulb and build the window glass for the space.” These facts were good to know and also made me proud of my work. They made me feel like I was contributing to this body of knowledge and helping to make the world a better place. Beyond the historical tidbits, I also learned each company’s distinct code of conduct and mission. These explained the principles that every individual within a company adheres to and follows. At Caterpillar we had an acronym called ICE-TS that stood for the company’s values: integrity, commitment, excellence, teamwork, and sustainability. These were like the DNA across the thousands of employees worldwide. Even if I called a colleague in Japan, it felt like I was talking to a family member.

How does information transfer or flow within the company? Meetings, meetings, meetings. Sometimes there is a pre-preliminary meeting for a preliminary meeting for a meeting. But without having the meetings you don't have everyone aligned and you don't have a plan of action to move forward. I was spending at least eight hours at work every day, and out of those eight hours it felt like I was only getting two to three hours of time to work because I was sitting in meetings. It was getting me frustrated, but through frustration comes self-development when you try to innovate your way out of the situation. So I reached out to colleagues, and they told me one simple trick to reduce your time in meetings is to block your work time on the calendar so no one else can block that time for you. Also, whenever you are scheduling a meeting with others, send out an agenda and a desired outcome ahead of time. I was hesitant, particularly for those pre-preliminary type of meetings, but I gave it a try, and it allowed me to reduce four different meetings to just one. These tips helped me cope with the inevitable meetings and manage my time effectively.

How do you process the unavoidable information overload? Initially it seemed like I was drinking information through a fire hose: emails, meeting minutes, slide presentations, documents, shared drives, and so on. How can you use this information effectively? The most useful tool that I found through one of my colleagues was to make a mind map. It’s a wonderful tool to take notes and collect different ideas and group them together in an affinity diagram. 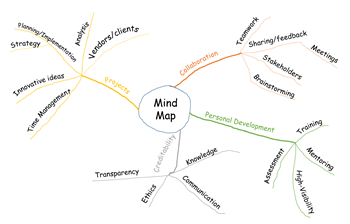 There's various software tools that can help you do this. The tools allow you to zoom into the details whenever you want, and you can even use the mind map as talking points when presenting to your managers. Another strategy for dealing with information overload was simple checklists, which helped me to prioritize my actions throughout the day. The checklist can be a living document that you can update anytime.

Then to understand how tasks were connected, I actually used a Gantt chart, typically used for project management, for my personal information management. These charts really illuminate the interdependencies of different tasks and can be very helpful.

About the Author: Ritesh Lakhkar is an interdisciplinary engineer and is currently working as Senior Operations Program Manager in consumer electronics wearables at Fitbit Inc. Prior to his current role, he worked in smartphone and LCD glass cutting and finishing technologies at Corning Incorporated. He has a B.S. in Mechanical Engineering from Govt. College of Engineering, Pune, India, a M.S. from Purdue University, and a Professional Engineer license. As an undergraduate, Ritesh interned at Purdue University ME Research Labs and Caterpillar Inc. where he started his career in manufacturing technology development. His interest foreign language and technical expertise helped him to travel extensively around the world. Ritesh volunteers for ASME, contributing significantly to technical communities and student and early career engineer programs.