Today’s early career engineer has to not only be technically sound, he/she has to adapt to a business engineering environment while navigating the fast pace of changing technologies and advancements.

This blog entry was derived from the FutureME Mini-Talks program held at the 2019 ASME E-Fest North which covered different perspectives and best practices on transitioning from school to work.

How to continue learning new technologies with your job?

It has often been observed, a recent graduate first transitioning into the workforce, starts wondering – “How can I continue to advance my career at the company that I'm working for? How am I going to continue learning about new technologies, if I'm not actually sitting in a classroom?” 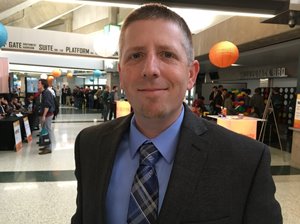 Brian Breuhan
In this article, the new ways of learning about new technologies without having to take certification programs (or other types of schooling) will be discussed. It's possible to learn about new technologies as Brian Breuhan, an Early Equipment Management Lead at Fiat Chrysler Automobiles, did by attending conferences and seminars. Typically, they're really reasonable priced or they're free with employer support. A lot of times, employers will pay for employees to go to these conferences. And it's a good benefit to the employees, especially if they can take back some information from those conferences. For example, Brian shares his experiences from a conference called "Manufacturing America", which he attended three or four years ago. The conference is organized by Siemens and is hosted annually in Detroit, Michigan at the Ford Field. Brian described the conference as “really cool and free.” There was free food and also there were a lot of good technical speakers that not only give talks on the topics, but also discussed the latest technology that they're working on, after the talks.

At that time when Brian attended the “Manufacturing America” conference, the concept of Industry 4.0 was relatively new. The concept of Industry 4.0 had initially started in Germany in 2013. At the Hanover fair (annual technical fair of Germany), Germans had brought up the idea that the industry was entering the fourth industrial revolution. A lot of European companies were actually looking at possible ways of implementing and making the manufacturing process more smart, more lean, and more cost-effective to be competitive with the rest of the world. Since almost every single speaker in the conference was referring to Industry 4.0, therefore Brian gained a good overview of this new concept. Even though Brian was working on a master’s degree, he kept on researching about Industry 4.0 apart from studying papers. In this way, he was able to self-study on what Industry 4.0 is.

About a year later, Brian was talking to one of his colleagues about Industry 4.0. During that conversation with his colleague, Brian’s boss stopped, and said –“Hey, FCA right now is looking at possible applications for Industry 4.0 technology and it's great that you seem to have an understanding about it, because I just got put on this team that's looking at an application for predictive maintenance.” So, Brian’s boss invited him to some of the conference calls with the higher executives in the corporation and Brian noticed that a lot of the people on these conference calls didn't even know what Industry 4.0 was; what type of technology was out there; what type of applications other companies were doing. That made him think a little bit about how he could teach both technical and non-technical people in the corporation about, Industry 4.0 meaning of the terminology and the technologies that are a part of this revolution.

Two years later, Brian was hosting a couple of gentlemen from Mexico. They were benchmarking some projects which were being implemented by Brian’s company at Warren truck assembly plant. One of those gentlemen from Mexico pulled out his cell phone and said “My son keeps playing this Pokémon game on his phone. I want to figure out how to use that technology and apply it to manufacturing.” Hearing this, most people were shocked. Even though Brian had never met this gentleman, he knew exactly what the gentleman was talking about. The gentleman was referring to the augmented reality aspect of the Pokémon game. So, instead of projecting a Pokémon creature out into the manufacturing facility, why can't we take that technology and be able to have machines with sensors embedded in them. So, that way when a person takes a tablet computer or smartphone and runs the phone across the machines out on the shop floor, then the person can see feedback from data from those machines. It usually takes a lot of downtime for skilled workers to get in there to modify or make adjustments to the machine. Due to this, it can be made easy to see what's going on with that machine from a distance based on the sensor feedback. And based on this information, a decision can be made as to when the machine can be repaired, adjusted without actually shutting down the entire production line.

In conclusion, people can continue to learn about new technologies by attending events like Manufacturing America. Events like these happen all around the world. Once people get interested in a particular technology, all they have to do is just a quick web search and they will find a lot of information to understand and grasp.

Brian Breuhan is an Early Equipment Management Lead for Fiat Chrysler Automobiles. Brian has worked in the manufacturing and engineering design for over 15 years. He holds a Bachelor of Science degree in mechanical engineering from Wayne State University and a Master of Science degree in Engineering Management from Central Michigan University. Brian is also a member of the industry 4.0 advisory council at Automation Alley and has held various leadership roles for ASME metro Detroit, including the chair and vice-chair positions.