ASME to Name the THRUSTSSC a Historic Mechanical Engineering Landmark 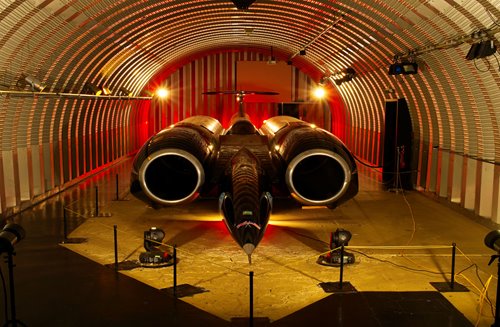 NEW YORK, Mar. 12, 2014 - The legendary ThrustSSC, the first car to break the sound barrier, will be recognized by the American Society of Mechanical Engineers (ASME) for historic significance.

ASME will name the ThrustSSC a Historic Mechanical Engineering Landmark at a designation ceremony to be held March 15, 2014, at the Coventry Transport Museum in Coventry, United Kingdom. The British jet-propelled car will join a roster of more than 250 engineering achievements from around the world that ASME has cited for their role in advancing the growth and progress of technology.

The ThrustSSC made history on October 15, 1997, at the Black Rock Desert in Nevada. There, Andy Green, a fighter pilot in the Royal Air Force, drove the car over a one-mile measured course, achieving a speed of 1,228 km/h, or 763 miles per hour.

The ThrustSSC employed a team of engineers and technicians, who applied computational fluid dynamics programs and wind tunnel testing to design an active suspension system capable of adjusting to the rapid increases in speed. The engineering team “solved novel mechanical, aerodynamic, and control problems to design a car that properly managed complex dynamic forces, including those from reflected shock waves,” says ASME in a bronze plaque to be presented to the Coventry Transport Museum at the March 15 ceremony.

ASME president Madiha El Mehelmy Kotb and members of the ASME Committee on History and Heritage will be among the officials representing ASME at the event.

In Case You Missed It: ASME 2020-2021 Congressional Fellowship Applications Now Being Accepted